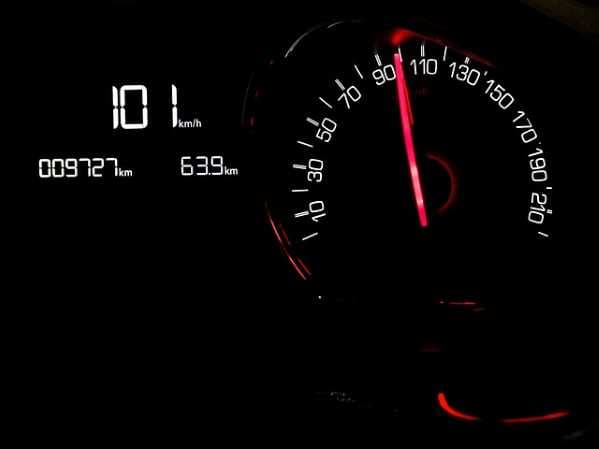 Good news for all of you out there with a heavy foot. Ford have come up with a device that can automatically vary your speed according to
the speed limit on the road you're on. Called the Intelligent Speed Limiter,
the device works with cruise control to keep you safe and legal.

Currently being offered on the new Ford S-Max in the UK, the
system will keep you moving at the maximum legal speed limit once initialized.
It uses cruise control and a windshield camera to watch for speed signs and
will adjust your speed accordingly. It's a switchable system, meaning you can turn
it on or off if you want to.

The camera sits in the windshield and effectively scans for
road signs featuring speed limits. It can recognize the numbers on the signs
and adjust your speed accordingly. Presumably, it can tell the difference
between speed signs and others featuring numbers.

When slowing, it will back off gently rather than brake to
avoid being a hazard and keep things comfortable in the cabin. If the system
thinks you need to brake, it will play an audible warning in case you're asleep
or not paying attention.

Ford says the system works well at speeds between 20 and 120
mph and has proven its worth in trials across Europe. It is going to be offered
in Ford's Euro models the Focus, Mondeo and Kuga as well as the S-Max. We
should see it here soon.

Ford had this to say in their press release:

"Breaking the
speed limit is not something we always do on purpose. All the same, it can be
costly in terms of fines, and driving bans, as well as playing a significant
role in many road accidents.

We are now launching
Intelligent Speed Limiter, a technology that could help prevent drivers from
unintentionally exceeding speed limits.

The system monitors
road signs with a camera mounted on the windscreen, and slows the vehicle as
required. As the speed limit rises, the system allows the driver to accelerate
up to the set speed - providing it does not exceed the new limit.

"Drivers are not
always conscious of speeding and sometimes only becoming aware they were going
too fast when they receive a fine in the mail or are pulled over by law
enforcement," said Stefan Kappes, active safety supervisor, Ford of
Europe. "Intelligent Speed Limiter can remove one of the stresses of
driving, helping ensure customers remain within the legal speed limit."

Further new
technologies available for the new S-MAX include the Pedestrian Detection
system that will reduce the severity of some collisions involving vehicles and
pedestrians, or help drivers avoid some impacts altogether.

The versatile
people-mover also is equipped to help out at junctions where it is difficult to
see. At low speeds a camera fitted in the grille monitors the view from the
front of the car, which is then displayed inside the car."