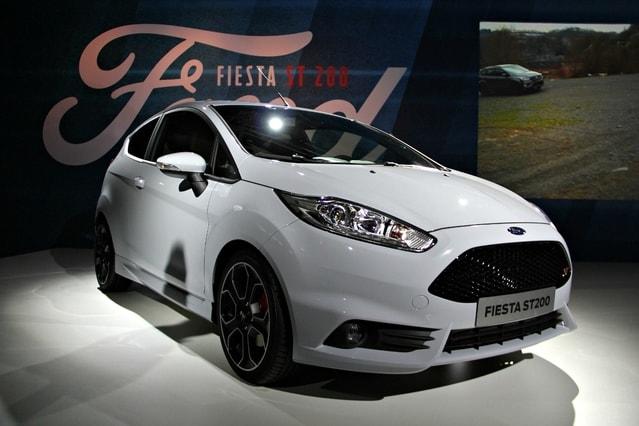 The Geneva Motor Show had a lot to show us, as it always does. As well as the 2017 Kia Optima Sportswagon and a range of supercars we would never be able to afford, there was a performance car we could, the Ford Fiesta ST200. Sporty Fords are something of a guilty secret of mine, having owned a few in my younger years. They are generally raw and unsophisticated but so much fun! While Ford may have softened those rough edges, that fun factor is still there which is why ST and RS models sell out so quickly. We think the Ford Fiesta ST200 is going to do the same.

While this is the European variant, we will likely get something like it even if it isn’t the two door version.

Fiesta ST200
The design of the Ford Fiesta ST200 is similar to the standard version but with a sporty twist. It gets a lower stance, new alloy wheels, a subtle body kit and other styling tweaks to make it stand out. The front end with red ST badge is the only real hint at what is driving behind you. At first glance it looks just like a standard Fiesta until you look closer.

In profile, things change drastically with those very cool alloy wheels and red brake callipers, lower sill, rear privacy glass in the quarter light and rear rooftip spoiler. Another red ST badge adorns the rear while the lower body sees rear trim around twin tailpipes. It’s an understated design that hints enough about its sporty credentials without being in your face.

Inside, a set of Recaro seats in front and some sporty trim mark it out from a standard Fiesta ST. The interior is still pretty good for the price and you can still get two adults in the back, which is more than many small cars can say.

Under the hood is a peppy little 1.6-litre four cylinder engine. It’s an EcoBoost motor with a turbo to give it 197 hp and 214 lb-ft of

We have no idea when the Ford Fiesta ST200 will make it to our shores, just that Ford have said it will at some point. In the meantime, the Fiesta ST is still a great little car to have fun in. Visit Northway Ford Lincoln, 388 King George Road Brantford ON N3S 3N2 for a test drive.