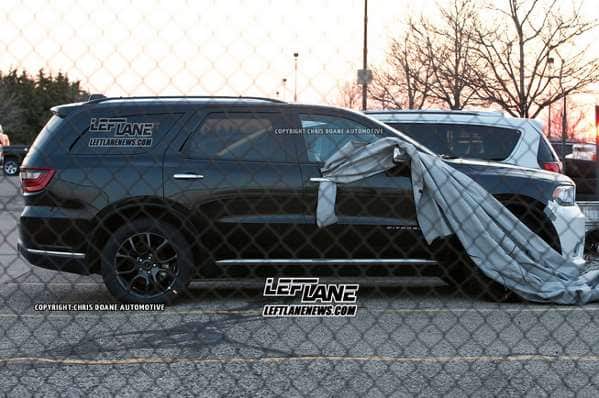 The Dodge Durango Hellcat has finally broken cover, at least that’s what the spy shot indicates. The image above, from Left Lane News, shows what looks like a hot Dodge parked up in Michigan in the U.S. It has led many to believe that it is the mythical 2018 Dodge Durango Hellcat.

The 2018 Dodge Durango Hellcat was tipped as being developed last year and we have been eagerly awaiting news ever since. Perhaps this could finally be it.

We like the Dodge Durango. It doesn’t get the same amount of attention as the Jeep Grand Cherokee, but we think it is an excellent SUV. With confirmation that a Hellcat engine will soon be powering a Cherokee, the Durango needs something special too. Like other Dodge vehicles, it just does its thing quietly and competently and without fanfare. If this is indeed a Hellcat version, that’s all about to change.

The 2018 Dodge Durango Hellcat is reported to feature the 6.2-litre supercharged V8 Hemi Hellcat engine currently in the Challenger and Charger. With an output of 707 hp and 650 lb-ft of torque and the most awesome engine noise imaginable, it is going to be something else if it materializes.

Rumours around the 2018 Dodge Durango Hellcat abound. The current thinking is that alongside the Hellcat engine will be the Torqueflite eight speed transmission, all-wheel drive, tuned suspension, brakes and exhaust system.

According to the images currently online, that spy shot is of a Dodge Durango Citadel with the Hellcat engine. The thought is that the configuration is a test of some of the mechanical systems without going the whole way and test driving the finished vehicle.

It’s a shame we didn’t get to hear that V8, but the spy shots are enough to keep us happy, for now!

2016 Dodge Durango
The 2016 Dodge Durango is a three row SUV that looks and feels the part without throwing it in your face. A regular sight on our roads, the vehicle is an accomplished drive that offers lots of interior space and refinement. It also offers good engines, decent features and a competitive price.

With a heady list of options, a genuinely comfortable cabin and competitive pricing, the 2016 Dodge Durango is a good bet as a full size SUV. Visit Parkway Chrysler Dodge Jeep Ram Mississauga, 2260 Battleford Road, Mississauga, ON, L5N 3K6 to book a test drive.