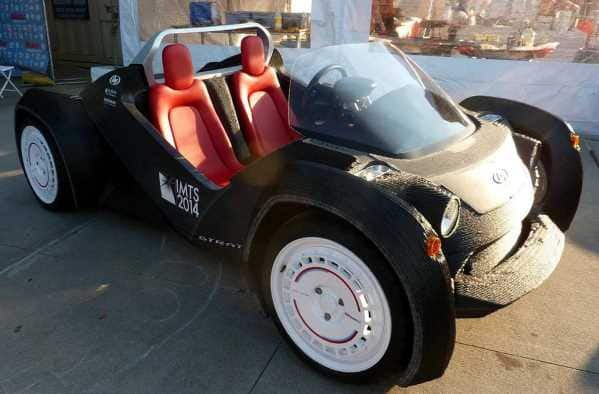 3D printing
has the potential to change manufacturing forever. It's already being used in
the auto industry to manufacture parts and prototypes. Now an entire car has
been printed. The Chinese manufacturer Sanya Si Hai has produced a 3D printed
car that hit the road this week.

The model,
Shuya, isn't the first printed car in the world. China's Local Motors Strati
has that honour. It was made last year and was tested on Chinese roads. It took
44 hours to print and put together and used an electric motor to power it to 50
mph. The Strati is apparently hitting Chinese dealerships this year with a
price somewhere between $15,000 and $25,000 CAD.

Sanya Si
Hai has done things slightly differently with their car, the Shuya. It's more
beach buggy than car but shows the true potential of 3D printing. The Shuya
took five days to make and only reaches 25 mph, but costs only around $1,500
CAD to make.

Everything
is printed except the electric motor and its supporting systems, making this a
very economical way to hit the road. Anyone with a printer large enough, the
materials to make the parts and the pattern can put this together. It's an
interesting development, but one we don't think will take off just yet. We
don't think automakers have much to fear from too many home-made cars!

For one,
these printed cars would never be allowed on our roads. Not until they modified
the designs to meet safety regulations. Insurers will also likely have a hard
time with these as quality couldn't be assured or guaranteed and plastic hasn't
yet developed the strength and crash protection of steel or aluminum. However,
We do think 3D printing will take on a niche following, much like hot rods or
car modifying.

The ability
to create something truly original or get a much cheaper kit car will be too
attractive for some to pass by. Also, the ability to simply print a replacement
part rather than going to the auto shop or dealership is a compelling mark in
its favour.

Classic car
enthusiasts and suppliers have already embraced 3D printing and use it regularly
to provide out of production parts for their vehicles. Ford uses the technology
to quickly deliver prototypes and many parts and specialist suppliers are using
the technology for pattern parts or specialist areas.

This is
where we see the strength of 3D printing. In the supply chain and in the design
stage. While the future of 3D printing may take it much further in the future,
we don't see a major threat to the traditional production line just yet. What
do you think?