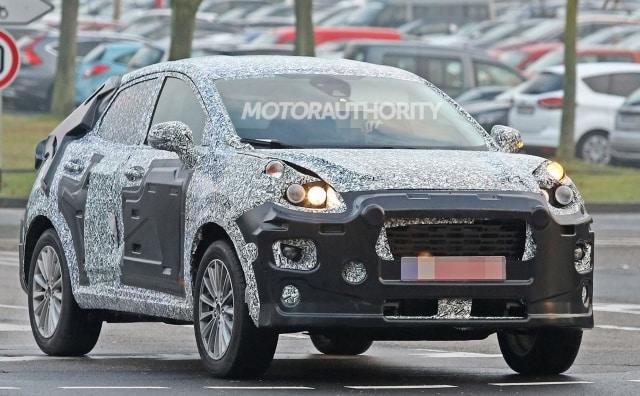 The Ford Ecosport is new to our shores but has been in production elsewhere for over six years. As we are losing the Fiesta next year, the Ecosport is seen as its spiritual successor. Even though our current model is only a year old, we can already glimpse the all-new Ford being test driven in Germany.

Featured over at Motor Authority, the shots show the outline of the new 2022 Ford Ecosport covered in camouflage. Even though you cannot see much detail, you can still see some departures from the current model. Spotted in Cologne, Germany the 2022 Ford Ecosport looks to be heavily inspired by the Fiesta.

The design looks completely different to the current model and is more car-like than any other crossover Ford has. Gone is the squarer profile to be replaced by a curved low hood, very raked windshield, curved roof and low hatch-like rear. So while Ford have cancelled the Fiesta, they bring us something that looks and likely, feels just like one in more of a crossover profile. Think Focus combined with Fiesta and you get the idea.

2018 Ford Ecosport
The Ecosport has been in production since 2012 in other territories but it only arrived in North America last year. It’s a small crossover that seats four comfortably and five at a push. The design is typical Ford and competes well with competitors like the Fiat 500X.

The design has the same look and feel of existing older Ford designs. The family grille, blue oval and angled lights, simple panels with a detail running down the length of the vehicle, slightly sloped roof and upright tailgate.

Being the smallest crossover currently on offer from Ford, interior space is adequate but not huge. It’s on par with the Focus in terms of space, design and layout and can seat four comfortably. Materials quality and build are all on point while front seats are well padded and comfortable. Tech can be specified to your exact needs.

Available in S, SE, SES, and Titanium trims, the 2018 Ford Ecosport does not disappoint in the customizability stakes. You get some generous included equipment and then have the option to specify as much as you like.

The 2018 Ford Ecosport is ideal for city living with escapes at the weekend. Easy to drive and park with enough space for luggage, it’s the ideal crossover. Check it out at Northway Ford Lincoln, 388 King George Road Brantford ON N3S 3N2.