Is the 2022 Ford Bronco Raptor the Best Bronco Yet?

Is the 2022 Ford Bronco Raptor the Best Bronco Yet? 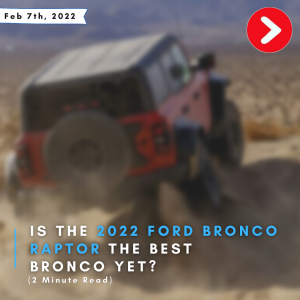 The 2022 Ford Bronco Raptor has been revealed. Not long after the now exceptionally popular truck was released, a new meaner version is here to deliver that visceral experience many wanted from the Bronco.

Ford has played a blinder here. They created enough demand for the Bronco that is sold exceptionally well at release.

They then whetted everyone’s appetite with rumours of a Raptor version and then delivered one a short while later.

“As the most badass Bronco yet, the Bronco Raptor design is extreme,” said Paul Wraith, Bronco design chief. “It’s muscular, while maintaining an underlying simplicity with performance-focused details added only for outstanding high-speed capability.”

Ford haven’t released many details on the underpinnings of the Bronco Raptor yet but we can see a few external changes from the pic.

We see a beefier bash plate under the engine, a different bumper, a new grille design, amber LED running lights, air vents on the hood, a new tailgate design and new tow hooks.

There also look to be more minor trim elements around and probably other things we missed on first inspection.

We know the suspension has been upgraded to provide more travel, the chassis strengthened and made 50% more rigid.

The track has been widened and ground clearance increased to make it more stable. Aside from that, we don’t know much else about the mechanicals.

We suspect the engine will be the 3.0-litre EcoBoost engine Ford likes to use with around 400 hp, but that has yet to be confirmed. Expect Ford’s 10 speed automatic transmission to feature too.

The 3.0-litre engine may just fit into the modest engine bay of the Bronco but there won’t be much room to spare. 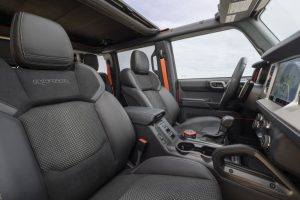 As far as we know, the cabin will be largely the same as the current model. It’s a simple, no-nonsense cabin that delivers exactly what buyers in this segment want to see.

A long dashboard with few flourishes, a touchscreen for controls, digital instruments and very comfortable seats. 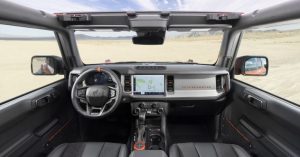 Exactly what extras the Bronco Raptor will have, we just don’t know.

We do know it will come with GOAT Mode and the driving selector. That will include Trail Control, Trail Turn Assist and Trail One-Pedal Driving and the other modes we see on the F-150 Raptor and other Ford off-roaders.

It may be tweaked for the Bronco, or may not, we’ll have to wait and see.

This is the 2022 Ford Bronco Raptor, so expect to see more details soon. The order book is rumoured to be opening in March 2022, so get your name down fast if you want one.

With the shortages, delays in production and popularity of the Bronco as a whole, we imagine there will be quite the queue once those books open!

We’d love to help you find the perfect car loan. Simply fill in the form below and we’ll get back to you ASAP!