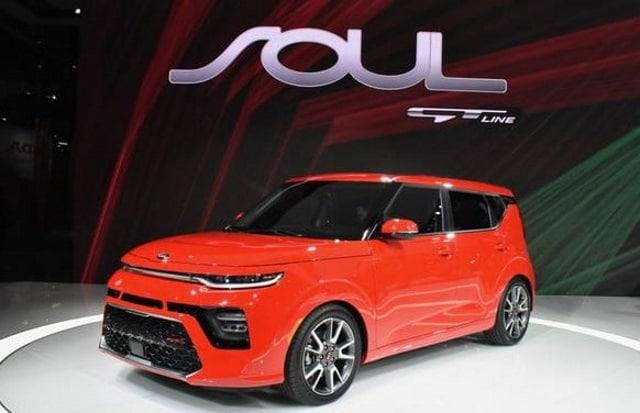 Both versions of the funky Kia were on show at the LA Auto Show, finally displaying them in all their glory. Both the 2020 Kia Soul and Soul EV were there and drew more of a crowd than you might imagine given what else was showing. That just goes to show just how popular this car is!

The design of the 2020 Kia Soul is very similar to the current model with a few neat tweaks. The narrow light bar along the front is one such tweak that reminds me of a Cylon helmet, Google it kids. A large lower grille with camera recess is flanked by a pair of substantial LED and fog light housings along with a very rounded fascia. The tiger nose is notable by its absence but not missed within the design.

A curved hood flows round the chunky look in a cool way feeding a rising beltline and upswung panel at the rear into the rear light cluster on the back. A flat roof maximizes interior space and that new rear light cluster looks very cool indeed. It looks futuristic at the back with a neat central exhaust.

The Soul EV is much the same except its front grille is filled in with a panel and there is no rear exhaust. A subtle charging port is on the very front and a blue EV badge is on the rear to differentiate the model.

Inside, the cabin is kept simple yet remains effective. There is plenty of interior space, comfortable seating and a pared back dashboard. The contrasting stitching and piping in the show car adds a neat touch to an already appealing car. The centre stack has a modest screen with a few controls and the entire package looks the part.

Under the hood
Under the hood of the 2020 Kia Soul is either a 2.0-litre four cylinder producing 147 hp and 132 lb-ft of torque or a turbocharged 1.6-litre. The EV has an electric motor with the equivalent of 201 hp and 291 lb-ft of torque. The gas engines will use a six speed manual or CVT for the 2.0-litre or a seven speed dual clutch transmission for the turbo.

The battery pack is still being worked on by Kia so exact details have yet to be announced. We do expect a good range, like the Niro perhaps.

Both the 2020 Kia Soul and Soul EV will be as character and feature packed as the current model and similarly priced too. If you would like to know more, visit Georgetown Kia, 199 and 314 Guelph Street, Georgetown, Ontario.