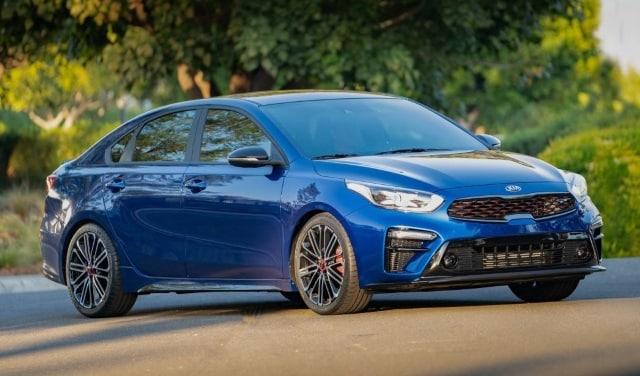 Kia have unveiled the 2020 Forte GT and it looks good! The Korean automaker has taken the standard Forte design and modernized it a little. They have also added a turbocharged engine to the GT giving it a little extra get up and go. Following in the footsteps of the very impressive Stinger GT, the Forte is bound to do well.

The 2020 Forte GT was unveiled at SEMA in Las Vegas and is the second car in the automaker’s lineup to get the GT treatment. It doesn’t generate the wow factor that the Stinger did but it takes an already decent car and makes it something special. With 201 hp on tap in what is a relatively small car, it’s going to do well I think.

Kia Forte GT
The Kia Forte GT takes the already aero shape of the Forte and adds a little flourish to differentiate it from its standard sibling. It has a different stance to the standard car thanks to different suspension geometry, red accents around the outside, including front grille and rear valance. A subtle GT badge at the front and rear tells sharp eyed observers that this isn’t a normal Forte.

The engine is Kia’s turbocharged 1.6-litre four cylinder. It’s the same engine as in the Soul Turbo and generates 201 hp and 195 lb-ft of torque. In such a light car, that will seem much more than the numbers imply when on the road.

There will be two variants, GT1 and GT2. The GT1 offers LED cabin lighting and a 320w Harman Kardon audio system. The GT2 will offer heated and ventilated sport seats. You will also be able to customize both models with the usual array of Kia goodies.

The base Kia Forte is a Top Safety Pick Plus from the US IIHS and is regarded as a very safe car. While Kia have yet to release many more details, it is logical that this rating will continue through to the Forte GT. That makes it one of the safest smaller cars around. Thanks to a redesign to improve the original small overlap crash rating, the Forte now is a safe bet.

Further details for the 2020 Kia Forte GT will be released in the coming months. I’ll keep an eye out for new information and will update the blog once I have more.

The 2018 Kia Forte is a solid bet for anyone looking for quality and price in one tidy package. Visit Grimsby Kia, 435 South Service Road Grimsby, ON L3M 4E8 to take a test drive.