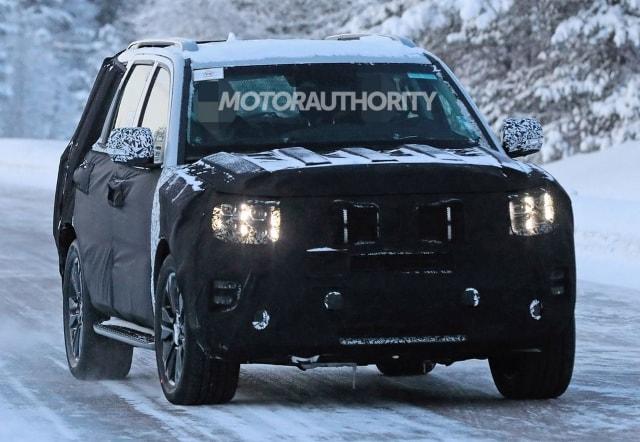 Even while Kia are working hard on the Telluride SUV, they are also preparing another model for market. This time it’s a midsize SUV that could be the upcoming Borrego/Mohave. Some rumours have it called the Borrego while others the Mohave. At the moment we just don’t know.

Either way, this model being tested is smaller than the Telluride and could be Kia’s answer to Ford’s domination of the SUV segment. The Borrego made a brief appearance in North America back in 2009 and was replaced with the very successful Sorento. The Mohave is a Kia global model available in some markets and is thought to be on its way to North America at some point.

This could be it.

2020 Kia Borrego/Mohave
The 2020 Kia Borrego/Mohave spy shots shown over at Motor Authority, show a midsize SUV with quite an upright stance. This model is thought to offer a more rugged design than the comfort-oriented Telluride and will likely compete with the Ford Bronco and Jeep Wrangler.

It’s a solid looking beast with rugged design, that upright stance, decent ground clearance, chunky light arrangement and running boards down the side. We can’t see much else thanks to the camouflage but it looks large enough to seat five or more in comfort with room for cargo in back.

It looks more Land Rover Discovery than Telluride in profile with a very upright front end, steep windshield and flat roof arrangement. An almost vertical rear end adds to this appearance of uprightness. It definitely hints at roominess inside even if the spy shots don’t show anything up close.

It is also widely believed that this model will run on the current Mohave platform and may perhaps be twinned with a Hyundai variant. The other Korean automaker has plans for a similar vehicle and given how the two companies like to share, this could be it.

Aside from what you see in the spy shots, we know nothing else about this SUV. What we know is pure speculation and there is nothing leaking yet. Although now we have seen the spy shots, more leaks and hints should be forthcoming as that’s usually the pattern.

If you’re in the market for a Kia SUV, check out the current range at Georgetown Kia, 199 and 314 Guelph Street, Georgetown, Ontario.