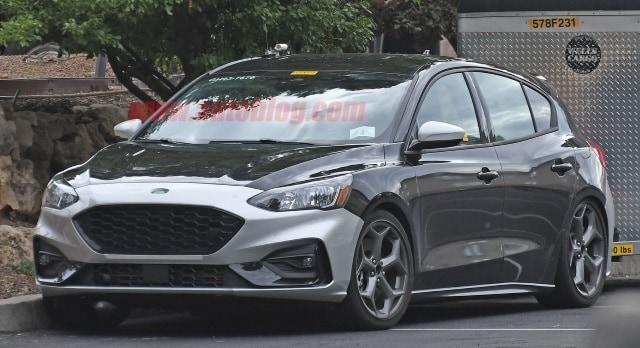 Continuing what is turning out to be Ford news week, we learned that the 2020 Ford Focus ST has been spied in the wild in the US. Having been spotted at the notorious testing track at the Nürburgring in Germany, the fast Focus has been seen again, this time in Colorado.

The 2020 Ford Focus ST was spied without camouflage, but bizarrely, towing a trailer. It looks almost identical to the one spotted in Germany and it looks very good. Before we get too excited, we are still not sure the fast Focus will arrive in North America despite being tested here. Ford’s shift to crossovers and SUVs means it may not arrive at all. And if it does, it won’t be in this guise.

The model in the images is a traditional hot hatch design. The front looks more racy than standard Focus but less racy than the insane RS models. It’s a good balance between the two and seems to sit comfortably in its niche. While pulled low by that trailer, the car does sit slightly lower than standard too.

The front end looks more shark-like than usual with a version of the Ford family grille and detailed lower sill. The fog lights and headlights look to be slightly modified too. A lower sill runs down the length of the car to the rear wheels. At the back what seems like a slightly different rear light setup and lower fascia complete what looks to be a nice looking car.

The hood and overall look of the ST is lower key than the RS which means it can function better in polite society. The RS looks like a hooligan and drives like it too. The ST balances slightly more refinement in favour of less power. It is still front wheel drive though.

Engines have yet to be announced by we think it will likely be the same 2.3-litre turbocharged EcoBoost engine that Ford favours in many of its performance models. It’s a great motor that delivers smooth power throughout the rev range and would fit perfectly into the Focus ST. We don’t know yet though so this is pure speculation but it makes sense given Ford’s consolidation of parts, designs and models.

Just what the 2020 Ford Focus ST was doing in Colorado is anyone’s guess. The most likely scenario was offered at Autoblog who said they were likely altitude testing the engine and drivetrain. This may be true, it may not. Europe has lots of high altitude roads and could easily have driven from the Nürburgring to Switzerland or Austria to do just that.

Either way, it is unlikely that we will get the 2020 Ford Focus ST in Canada. At least not in this guise. It doesn’t stop us hoping that Ford will sell it here!