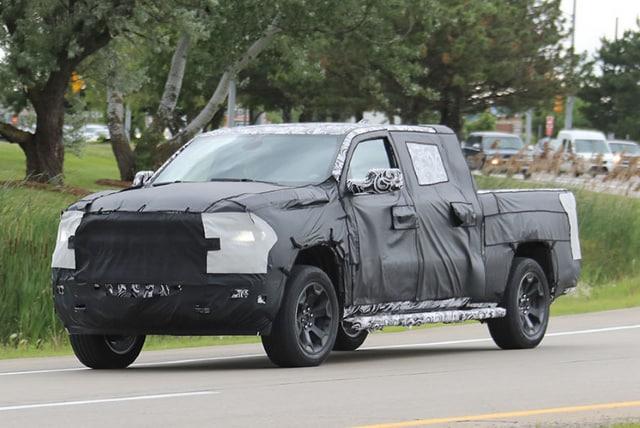 The Ram 1500 is a huge money spinner for FCA so any update they introduce has to be very carefully considered. It must be a nervous time indeed as the automaker tests and refines the new 2019 Ram 1500. From spy shots spread across the internet, they are well into their testing.

The above image, courtesy of Trucks.com is one of a number of spy shots released of what is widely believed to be the 2019 Ram 1500. Spotted out on the road in Detroit, the truck looks to be a slight departure from the current model.
The first things that strikes you is the size of the cab. It looks much larger both at front and in back. To retain cargo carrying capability, that would mean the truck becoming longer too, certainly in King cab trim. It wasn’t possible to measure length but it is likely that the 2019 Ram 1500 will be longer and possibly slightly wider than the current model.
Other elements that show through is a slightly modified front grille. It looks to be following the trend of combining with headlights and may even be slightly narrower than the current version. Again, it is difficult to tell through the camo, but the grille doesn’t look quite so tall.
There are interior spy shots that are not so clear. They do show a feature packed dashboard with large screen with some rotary dials underneath. Presumably this is Uconnect with dials for AC and temperature.
2019 Ram 1500 mechanicals
We actually know very little about the engines and mechanicals underneath. If the truck is larger, there is likely to be some materials changes so as not to make it too heavy and to maintain decent gas mileage. We expect the current range of V6 and V8 engines to be available along with a diesel. We think it likely that each engine will receive upgrades to improve output and efficiency.
The diesel is dependent on the outcome of the issue FCA is having with the U.S. EPA. There are also rumours of a hybrid powertrain for 2019 that would mate a 48 volt electric motor to a four cylinder engine. While the four cylinder has been leaked, we don’t yet know if this hybrid will make it to production or not.
It is widely expected that the Ram will continue the body-on-frame construction as the current model and will also use coil spring suspension with air suspension elements or options.
It seems there are definitely changes afoot for the 2019 Ram 1500. Exactly what form those changes take is still up for debate. With manufacture slated for January 2018, there isn’t long to wait until we know what to expect.
The current range of Ram trucks are still awesome and there are some serious savings to be had with both new and certified used trucks. Visit Parkway Chrysler Dodge Jeep Ram Mississauga, 2260 Battleford Road, Mississauga, ON, L5N 3K6 to see how much you could save!