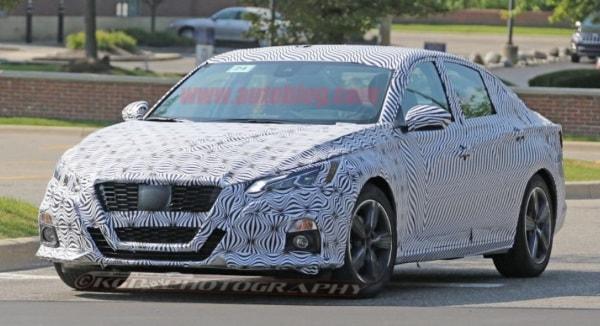 Nissan have recently announced that they will be showcasing the new 2019 Nissan Altima at the 2018 New York Auto Show. While refreshed in 2016, this model is actually six years old and due a reinvention. As one of Nissan’s best-sellers, it sorely needs to be kept up to date and competitive.

From the spy shots we have seen, the new 2019 Nissan Altima looks the business. While still under camouflage, the shape is much more purposeful. A lower front end with narrower nose, angled lights, swept windshield and curved roof all add aero pretensions to the shape. Panel detailing across all sides also adds interest, including one that looks to travel the whole side of the car up to the waistline at the rear.

Other spy shots on the internet have shown a floating infotainment panel that has divided opinion online. I happen to like it. The simplicity of the design means I look at what is on the screen rather than being distracted by switches and controls either side. It looks more like a tablet than touchscreen and given many of us use tablets on a daily basis, should fit right into our comfort zone.

Midsize refresh
The Altima used to be Nissan’s best-selling vehicle. Overtaken by the Rogue it may have been, but the Altima still sells in the hundreds of thousands. The current model was released in 2012, which is an age in the current climate so this has to be more than just a new skin.

The 2019 Nissan Altima looks new and takes some cue from the Maxima, which is a good thing. It is expected to keep using the global D platform that underpins the Pathfinder and some Renault and Infiniti vehicles with a few refinements. Perhaps it might be slightly longer as seems popular at the moment to add more rear passenger space.

We don’t yet know what engines will drive this sedan although we can make a guess. I think the current crop of four and six cylinder engines will be tweaked to deliver a little more power and gas mileage but that will be it. The current 2.5-litre V6 engine is a very competent unit that has been very reliable. I would imagine it has been toyed with to get a few more miles to the gallon but not a lot else.

I also think the CVT transmission will have been further refined and will remain. I am happy to be corrected of course, but I think that’s the way things will go. The old rubber band character of the CVT is long gone and this new generation of transmission is working out well according to owners, so why change it?

We have no idea when the 2019 Nissan Altima will be officially unveiled or released. In the meantime, the current model is still an exceptional car for the money.
Photo credit: Autoblog