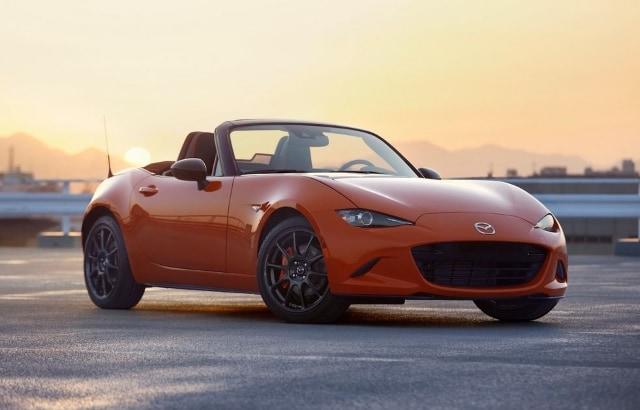 With the Chicago Auto Show having been and gone, I now have time to reflect on what I saw. One of the highlights for me was the 2019 MX-5 Miata 30th Anniversary Edition. I love this little Mazda. It’s small but perfectly formed and is as much fun as you can have in a car without spending more than your mortgage.

The 2019 MX-5 Miata 30th Anniversary Edition celebrates the 30th anniversary of the MX-5. The little roadster has come a long way in that time and has managed to remain streets ahead of the competition. While that competition is now more stylish, more powerful and more reliable than before, they still cannot compete with the poise and sheer fun of the MX-5.

The special edition has a special Racing Orange colour that certainly stands out. It’s a great colour and in an interpretation of a heritage colour from the first Miata back in 1989. With corresponding interior trim, original alloy wheels, Recaro seats, Bose audio, Brembo brakes and Apple CarPlay and Android Auto, this edition isn’t just about the looks.

There will be only 3,000 of these special anniversary editions made. We don’t know how many will be coming to Canada but the US is only getting 500 so I would imagine it would be close to that.

2019 MX-5 Miata
The 2019 MX-5 Miata is a superb little car. It has a fantastic design, all the characteristics we look for in a roadster, great handling and a fun factor you don’t get anywhere south of $70k nowadays.

The long, low hood and simple front end belie the style of the car. Simple rounded panels flow effortlessly down each side with each wheel arch flowing outwards. The trunk points downwards onto an unfussy rear with a pair of neat lights. It’s a masterpiece of design.

On the inside, there is plenty of room for two. The driving position is low but offers great visibility and superb feedback from the road. With purposely simple controls and dashboard, you can concentrate on the road instead of the numbers.

Under the hood is a very capable 2.0-litre four cylinder engine that produces 181 hp and 151 lb-ft of torque. A six speed automatic or manual transmission sends power to the rear wheels. While not huge numbers, in a car as light and as tuned as this, that’s plenty of power to have fun with!

As you can probably tell, I’m a big fan of the MX-5. If my lifestyle allowed it, I would own one already. But until you can fit a big dog, mountain bikes and all my kit into one, it isn’t for me.

If you think the MX-5 is for you, visit Mazda of Hamilton, 1977 Upper James Street Hamilton, ON L9B 1K8 today!