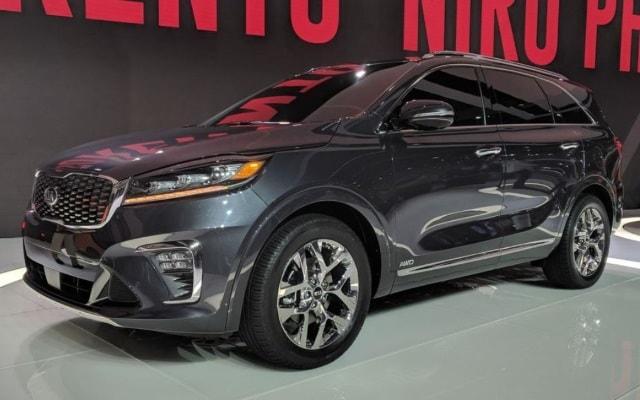 As well as the 2018 Kia Niro Plug-in Hybrid, the LA Auto Show also showed us the 2019 Kia Sorento. The Kia family favourite gets some minor cosmetic updates for the new model year along with an engine change and some new tech features.

Kia themselves said the design update was modest. We agree but would go further by adding ‘why change what works so well right now?’ The design of the current Sorento is a good one, in sync with the times and design trends of the moment so there is no need to change things right now.

Here is a video of the 2019 Kia Sorento in action.

Design tweaks
There are changes, however minor. There is a new grille and new headlight configuration that will feature on all models. Those Sorento with the newer fog light setup will see those change slightly while the rear gets a new bumper, light setup and liftgate.

On the inside, we see a new steering wheel, new transmission shifter and new instruments. The vents and controls in the centre stack have been tweaked too.

The big change comes under the hood. The existing turbocharged four cylinder engine is no more. It will eventually be replaced with a turbodiesel that has yet to be announced. For now, the 2019 Kia Sorento has a 2.4-litre four cylinder that produces 185 hp and a 3.3-litre V6 that produces 290 hp. The 2.4 uses a six speed transmission while the V6 gets a brand new eight speed automatic.

Diesel engines may not be popular right now but they are gaining popularity. Their inherent reliability and all that extra torque has won fans across the buying range. As soon as its bad reputation has faded and people realize that getting 40-50 MPG is easily achievable with careful driving, it will pick up again. Kia certainly seems to be betting on it.

The 2019 Kia Sorento is due sometime next year with the details of the diesel coming around the same time.

Visit Grimsby Kia, 435 South Service Road Grimsby, ON L3M 4E8 to learn more about the 2019 Kia Sorento or to check out some great deals on the existing model.