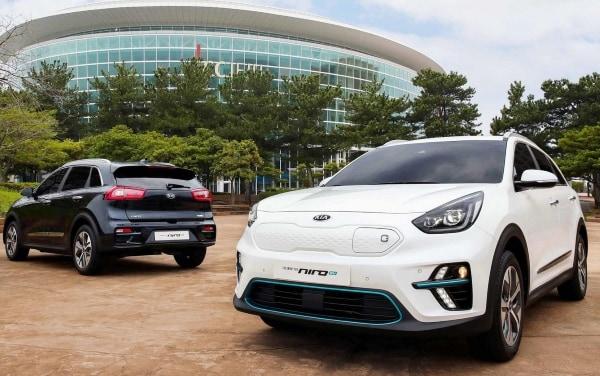 Last week saw us get a glimpse of the new Kia electric, the 2019 Kia Niro EV. The Korean automaker has taken a very popular crossover and added electric power with a stated range of 280 miles. If it weren’t for what looks like an excellent piece of design, that 280 mile range would be the headline here but instead it has to share the limelight with that design.

The concept was first shown at the 2018 Consumer Electronics Show earlier this year. We liked it then and we like it now. Along with the Hyundai Kona Electric, the Niro EV looks to be the most interesting pure EV release this year.

The 2019 Kia Niro EV does differ a bit from the concept. The design has been pared back and it now looks more like a Kia. The Niro is still in there in the shape but the signature tiger nose has been filled with a panel as air isn’t needed for the engine. Angled lights, steeply raked windshield, a relatively high ride height and long sloping roof into a rear hatch keeps things nice and tidy.

We don’t know much about the interior as only external shots were released. The official debut of the 2019 Kia Niro EV is the Paris Auto Show in September but it seems Kia got impatient and showed us some teaser shots well in advance. According to Kia, the model you see in the image is the production-ready model. So what you see is what you’ll get.

Electric dreams
Full specifications of the 2019 Kia Niro EV will come later but Kia did inform us that the new EV is equipped with two new lithium-polymer battery options. One is a 39.0kWh and the other is 64 kWh. The former provides up to 150 miles of range while the larger battery achieves a reported 280 miles.

We don’t know the motor or power output yet either but as the 2019 Kia Niro EV is closely related to that Hyundai Kona, it is thought they will share the same motor. In the Kona, the smaller battery is mated to an electric motor that puts out the equivalent of 133 hp while the larger battery and motor combination delivers 201 hp. Both are FWD.

Even though the design is hugely simplified from the concept, I like it. It is simple, unfussy and still looks like a Niro. While Hyundai have been more daring in the Kona, I think the Kia will ride and handle better like Kia’s usually do.

The Paris Auto Show is in October so we have a little while to wait for the 2019 Kia Niro EV. In the meantime, why not check out the current range of Niro at Kia of Hamilton, 1885 Upper James St, Hamilton ON, L9B 1K8?