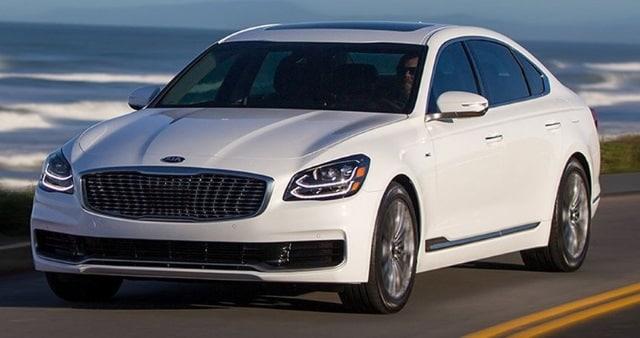 The 2019 Kia K900 is being showcased right now and I got time to take a good look at it. This second generation luxury sedan from Kia has already proven its worth and sold better than anyone imagined. While it didn’t steal a crown from any of the incumbents, it did force the entire segment to up their game. For that alone the K900 deserves attention.

The 2019 Kia K900 looks smooth. The design is more refined than the previous model and looks much more on par with its German rivals. There is very definitely a European flavour to this new design but there is also a little North America there too with a big grille, big wheels and lots of chrome. It’s a balanced design that is going to do well.

K900
There is a maturity about this design. It isn’t as good looking as an S-Class or 7-Series and doesn’t look as luxurious as a Continental, but neither does it cost as much. The lines are clean, the design subtle and even with those big wheels, the car could slide in and out of traffic without even being noticed.

Inside, if you didn’t look at the badge on the steering wheel you could be in any luxury sedan. There is a large digital instrument cluster, another large centre screen, lots of leather and wood, subtle controls, a dial controller for navigation, automatic shifter and a very pared back interior that shouts luxury rather than showing it.

Apparently, the 2019 Kia K900 has taken handling cues from the Stinger and now handles completely differently than its predecessor. It is more composed, handles better, corners better and doesn’t sit back at the haunches so much when you hit the gas. Kia says the chassis is 33% stiffer than the previous model and has been tuned specifically for those changes.

Under the hood is the 3.3-litre twin turbocharged V6 engine from the Stinger. It produces 365 hp and 376 lb-ft of torque and sends it to all wheels through an eight speed automatic transmission. The previous V8 was a smooth beast but we know how good this V6 is in the Stinger. While toned down a little for the K900, we know the power and torque it is capable of.

With Level 2 autonomy thanks to Lane Follow Assist and front radar, the K900 is going to be a safe car as well as a comfortable one. A new blind spot monitoring system is also present with video cameras in each side mirror which feeds into the digital dash. Alongside the usual safety tech, we expect the 2019 Kia K900 to be a very safe car that will showcase new tech that will eventually trickle down to other models.

The 2019 Kia K900 is an excellent luxury sedan for those who like something a little different. It is substantially cheaper than the competition and offers all the comfort you could need. Visit Grimsby Kia, 435 South Service Road Grimsby, ON L3M 4E8 to learn more.