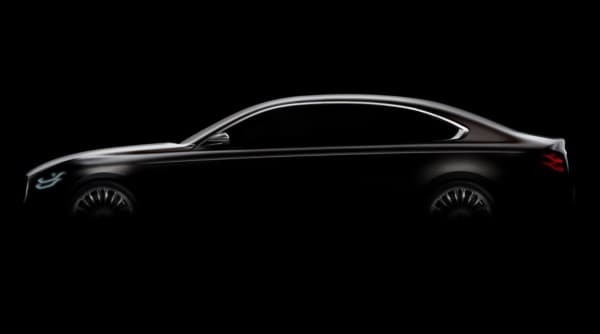 You would be forgiven for having forgotten that Kia has a flagship sedan, unless you own one. The K900 may have all the bells and whistles of a luxury sedan but it doesn’t like to make a noise with them. That is about to change as the Korean automaker teases the 2019 Kia K900 ahead of the New York Auto Show.

Last week, Kia released a teaser image of the 2019 Kia K900. It didn’t tell us much but from the shape alone, I think things are about to look up for the under appreciated sedan. The shape is very reminiscent of an Audi A8 with a nose bump. The crease over the front wheel arch is very distinct and is enough to differentiate the K900 from its German competitor.

The silhouette looks longer than the current model, which is on trend right now to add more rear passenger space. The profile also looks more aero and sleeker overall. This could be helpful in getting a little more gas mileage while also adding more western appeal to the car as a whole.

The original K900 was introduced in 2015 and was almost entirely designed in Europe and Korea. This time, a partnership with Kia’s US design house has developed a car that will hopefully increase sales across the board in North America. We don’t know anything yet, but expect to see the full package in New York.

2018 Kia K900
The 2018 Kia K900 is about as comfortable as a car gets but has such a low profile that few people really notice it. That is a good thing if you’re an owner as it adds an aura of exclusivity. Not so much if you’re Kia as it means fewer people know about and appreciate pure quality if they don’t know it exists.

The K900 is very understated on purpose. It has been designed to slice effortlessly through the air and through traffic and not shout about it while it goes. The ride is sublime. Smooth, unruffled and very, very quiet. It is more a car to be driven in rather than drive but has great driving dynamics if you choose to drive yourself.

One of Kia’s strengths is value and the 2018 Kia K900 exudes that. It is cheaper than all of its German contemporaries while offering similar performance, features and comfort. All within a very understated package.

I think the 2018 Kia K900 deserves a lot more credit than it receives. Learn more about this unassuming luxury sedan at Kia of Hamilton, 1885 Upper James St, Hamilton ON, L9B 1K8.