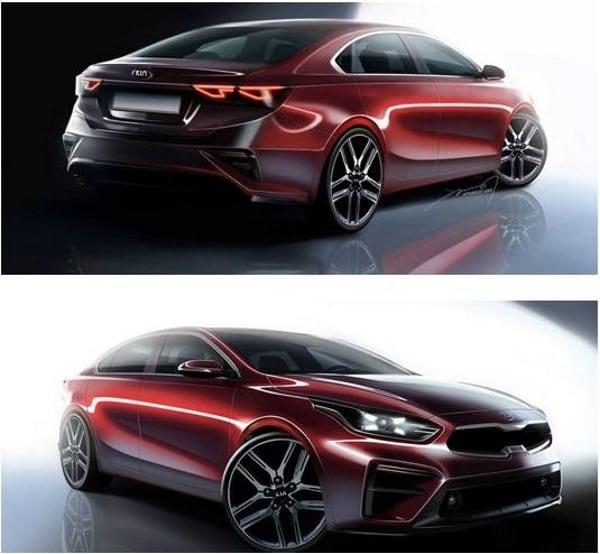 The Kia Forte is a real crowd pleaser. It is well designed, perfectly sized for its target market, easy to drive, capable and cheap to insure and buy. So any change to such a car needs to be done carefully as no automaker wants to alienate fans or annoy future buyers with unnecessary changes. It seems the designers at Kia took that to heart.

While we can only see teaser images right now but all that changes once the 2018 North American International Auto Show at Detroit gets underway later today. Starting on the 15th January, the show is the biggest show in the US and is the one most automakers plan their big reveal. The 2019 Kia Forte will be one of them.

2019 Kia Forte
Kia released a couple of teaser images last week to whet our appetite for their new vehicle. The design looks to have been seriously modernized and made sportier with lots of panel detailing, a lower slung look and a redesigned front end.

Accompanying the images was a release from Kia telling us that the new Forte will have the swept back silhouette of the Stinger. While that isn’t obvious from the image, combine it with the sportier front end and we could have quite a change of direction for the little Forte. I would imagine there would be a ‘sensible’ version for all those who don’t want to drive sporty cars but the new look seems very good indeed!

While I don’t include the interior image, it is everywhere online. The simple horizontal dashboard has been pared back to the bare necessities. A very simple dashboard and driving position looks refreshingly different to the hordes of controls and buttons in many other cars. Presumably, controls will be either hidden or used through the touchscreen.

We don’t yet know the engine or transmission or whether the Forte is moving more towards the Stinger in more ways than just design. I suspect it will retain the four cylinder engines but may slide a turbo unit in there somewhere.

As far as we know, the options will be similar to the current model. We suspect the 2019 Kia Forte will be available as a sedan and a hatch. The Koup version is sadly no longer with us but the body shape works well with either a trunk or hatch.

Fortunately we don’t have long to wait until the big reveal as the show opens today. If you’re in the market for a low cost, high performing car, you can’t get much better than Kia. Visit Kia of Hamilton, 1885 Upper James St, Hamilton ON, L9B 1K8 to see what’s on offer.