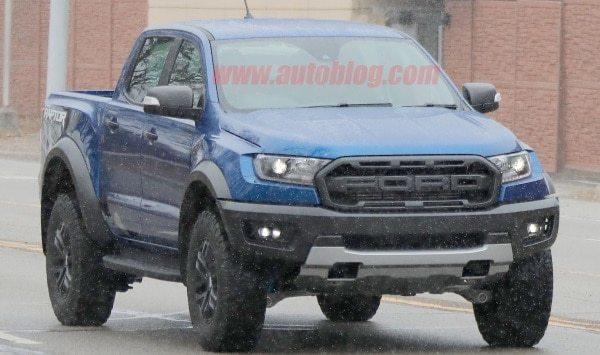 After speculating a couple of weeks ago about possible Ford small truck variants, it seems our suspicions have been confirmed. The Ford Ranger Wildtrak has been spied out in the wild alongside a Ranger Raptor. The standard Ranger isn’t even out yet and already two special editions are being tested. It’s a good time to be a truck fan!

The Ranger has had a lot of coverage recently. Probably more than the eagerly anticipated Ford Bronco and for good reason. The Ranger is the go-to truck for those who like the look and want the utility but don’t want something the size of the Ford F-150. It is that ideal middle ground for those who want to haul smaller, lighter loads while enjoying all the benefits of a Ford truck.

The Raptor broke cover a little while ago but the Wildtrak is something new.

2019 Ford Ranger Wildtrak
The 2019 Ford Ranger Wildtrak was spotted last week in Michigan driving along with a Ranger Raptor. The Wildtrak is a pared down Raptor which still looks good and we now know that for sure thanks to the complete lack of camouflage. We have to assume that was on purpose and Ford well knows that photographers hang out looking for just such an opportunity.

The 2019 Ford Ranger Wildtrak is a little more filled out than the standard Ranger with a tweaked grille, front bumper, fog light surround, rear truck bed and rear lights. The tweaks are subtle but are there. The only wrinkle is that we don’t know if this will be a North American model or not. The one pictured is a right-hand drive and has a diesel engine. Both things we won’t be getting here.

The Ranger Raptor is more distinctive than the Wildtrak. In the same blue colour as the F-150 version with similar increased ground clearance, off road tires, front grille and aggressive styling, it is going to be a sure-fire hit. We think it will feature Ford’s 2.3-litre turbocharged EcoBoost engine but we don’t yet know.

Both of these trucks are exciting and prove that Ford really knows how to design and build the products we want. I am hoping to get hands on one of these whenever they are released and Northway Ford get their allocation. For now, Ford have yet to even confirm they are coming to Canada so I won’t hold my breath.