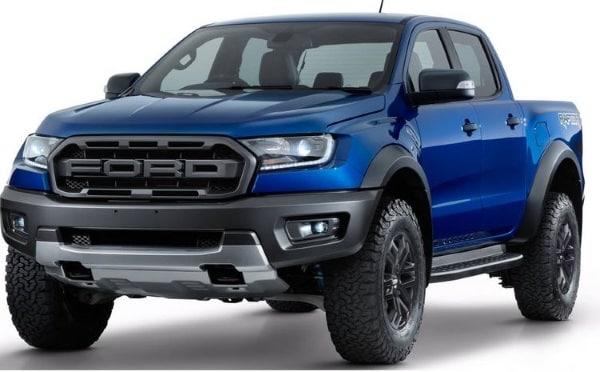 The 2019 Ford Ranger Raptor has finally broken cover in Thailand and it looks good! The baby Ford truck looks a lot like its bigger brother the F-150 Raptor and that is a good thing. The only bad thing is that we don’t yet know if we will be getting it in Canada.

Trucks are funny things. They are designed and built for work and constructed to be utilitarian, but we love adding sporty pretensions to them. All manufacturers do it and we buy them in their thousands. Many of the comments I have heard and read about the new Ranger were asking less about when it will be arriving and more about whether we will see a Raptor version or not.

The image shows the Asian market version of the 2019 Ford Ranger Raptor. Ford said at the press conference after the reveal that this is the Asian variant, which has led many of us to believe that we will see a Ranger Raptor at some point and it will be slightly different to this one.

2019 Ford Ranger Raptor design
For all intents and purposes, the Ranger Raptor looks just like the F-150 version. It is smaller of course and this version has the driving position on the wrong side but the rest is remarkably similar.

It has similar lights to the new Mustang which fit perfectly next to the black grille and flared wheel arches. There is a lot of panel detailing up front which eases up in profile towards the rear. The hood is a complex shape that includes a curve on two planes and a bulge in the centre.

Black trim throughout looks far superior to the usual chrome and there is a lot of it. A polished aluminium bashplate underneath the front sill is the only splash of metal to be seen and the Raptor looks better for it. Black alloy wheels, black side steps and black trim everywhere else looks superb.

2019 Ford Ranger Raptor mechanicals
The engine is a bit of a surprise. It is a 2.0-litre turbodiesel that delivers 210 hp and 369 lb-ft of torque. It uses Ford’s 10 speed automatic transmission to send power to the rear wheels. This may not be the motor we get to see as we aren’t quite so enamoured with oil burners as other countries. Ford didn’t say anything about other engine options so we just don’t know what to expect.

One thing that did pique our interest was the suspension setup. It has solid axle long-travel suspension with coilover springs and a Watt’s link system at the back. Ford said this setup was designed to handle ‘high-impact off-road events’ which could be a fun viewing experience.

While Ford have remained tight-lipped about any North American launch for the 2019 Ford Ranger Raptor, it would be insane to not release it in the home of the truck. I’ll keep an ear to the ground and let you know anything more. For now, get your truck fix satisfied at Northway Ford Lincoln, 388 King George Road Brantford ON N3S 3N2.