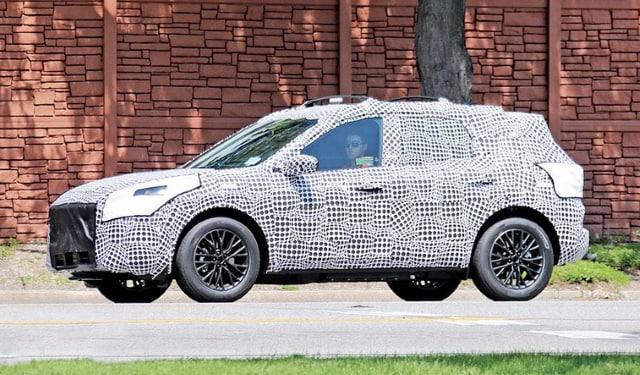 The above camouflaged image is apparently the 2019 Ford Escape PHEV. It was spotted while being tested on the road last week. It and it’s Lincoln MKC sibling is expected to hit dealerships sometime next year so this is likely late-stage testing before the vehicle is signed off. The Escape is a best-seller for Ford so it had better be good!

Apparently, the Ford Escape is second only to the all-conquering F-150 truck in terms of sales for Ford. The current Escape has been with us for over six years now so is due to a redesign. That’s what we are expecting in this model, although we know very little about it just yet.

The image above shows us the familiar Escape outline but with a slightly different front and rear end. The giveaway is the flap on the right fender where a plug for the plug-in part of the Escape to go.

We don’t know exactly how it differs as yet but the shape indicates a more refined look that would fit in with what we know about where Ford wants the Escape to sit in its lineup. After telling us about their more rugged crossover that seems a very similar size, it is likely that Ford wants the Escape to become the higher tier vehicle while the new model fills the Escape’s old spot.

The 2019 Ford Escape PHEV is expected sometime late next year.

2018 Ford Escape
The 2018 Ford Escape has gone down exceptionally well with buyers. It has all the advantages of an SUV, high ride height, good visibility and great passenger space but drives like a car. It rides well, corners well and has the same characteristics of a hatch like the Focus.

The design is typically Ford. A narrow front end with modest grille and angled headlights. A lower sill and fog lights add a little character and fluted panels across the whole vehicle offers places to look as you take it all in. A very raked windshield and sloped roof offers aero pretensions while the entire package is about as friendly and as approachable as a crossover gets.

The usual Ford trims are on offer here, S, SE, SEL, and Titanium. All offer the levels of equipment we are familiar with from Ford as well as the extensive options list. All for a very competitive price. If you’re in the market for a do-it-all crossover that drives like a car, the Escape is it. Visit Northway Ford Lincoln, 388 King George Road Brantford ON N3S 3N2 to see it in action.