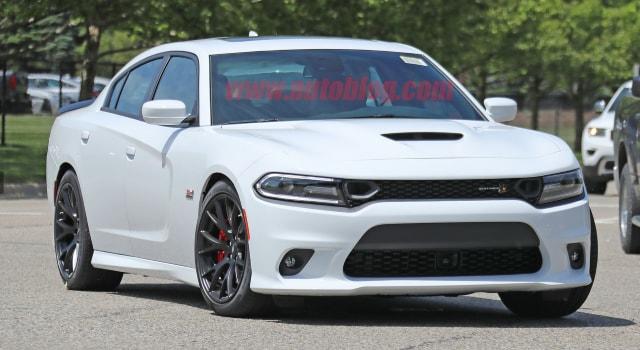 We all saw the teaser images of the 2019 Charger that Dodge released showing us the new grille. That was supposed to see us through until the official reveal, except it didn’t. Further spy shots show us the entire car without camouflage driving around in broad daylight.

The spy shots, courtesy of Autoblog.com clearly show an SRT version of the Charger. We see the new grille here too which may tell us that the SRT gets the same treatment as the Hellcat. The hood has also been modified slightly but the rest looks very similar to the current model.

We do expect a few other changes even if they aren’t obvious to the eye from these shots. There was talk about it being a little wider and longer and a lot of effort being made to make it lighter and therefore higher performing and better on gas. While nobody buys a Charger to count the MPG, it would be a nice by-product to have.

As I seem to say so often with some cars, Dodge have to be careful how they update heritage models like the Charger. Update it too little and fewer new buyers will want one and it fails to attract new fans. Update it too much or in too many ways and existing fans will get angry. It’s a position that is very hard to judge and not one I would be happy to be in.

The official reveal of the 2019 Dodge Charger and Challenger will happen sometime this summer so we don’t have long to wait to find out exactly what’s in store.

2018 Dodge Charger
The 2018 Dodge Charger is an awesome car that is available across a range of trims. It is an iconic vehicle that is easy to drive everyday. A lot of work has been done refining the chassis and suspension to make it more than just a muscle car and all that work has paid off. The Charger not only looks amazing but the performance and driving characteristics match it every step of the way.

Despite being mainly about performance, the 2018 Dodge Charger is also five star safety rated!