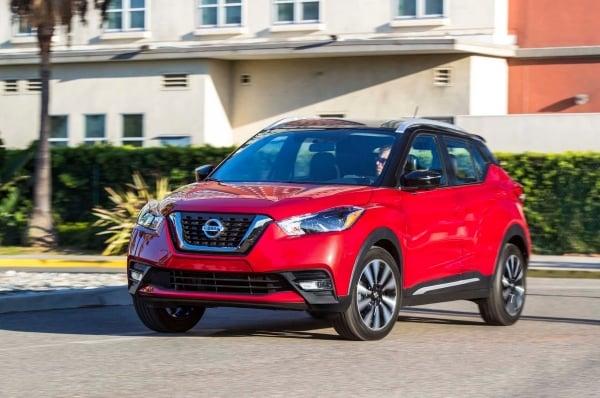 We have known for a while that Nissan was planning to replace the Juke with a newer and cooler crossover. Later we found out it would be the 2018 Nissan Kicks. Now we know a little more thanks to information released by Nissan Canada. It will be on sale next month so here’s a little information to whet your appetite.

The 2018 Nissan Kicks is a funky little crossover that looks to keep the fun factor with slightly less polarizing looks. It is a typical Nissan design with V grille front and centre, high ride height, high beltline and sloping roof. A neat set of lights that flow over the front fenders is neat, as is a similar pair of taillights at the rear.

The two tone red and black of the official image looks very modern while the polished alloy wheels and modest chrome trim draw the eye.

Inside, the Kicks has a single dashboard flowing across the width of the vehicle. Called the ‘Gliding Wing’, the dash is uncluttered thanks to the touchscreen and controls around it. Other controls are on the steering wheel while the shifter is exactly where it should be.

Power kick
The 2018 Nissan Kicks will have quite a modest engine, a 1.6-litre four cylinder that produces 125 hp and 115 lb-ft of torque. It will, of course, use Nissan’s CVT transmission to deliver power to the front wheels. As far as we know, that is the only engine option. Given the small size and probable light weight of the Kicks that engine will likely give quite a lively drive.

The Kicks will be available in S, SV, and SR trim levels. All models will get automatic emergency braking, automatic headlights and Bluetooth connectivity. The S will have steel wheels. The SV will have alloys, climate control, keyless ignition, Apple CarPlay and Android Auto and a 7.0-inch touchscreen.

I like the look of the 2018 Nissan Kicks. It is small yet keeps the fun factor introduced by the Juke. It looks like it will be nippy around town, easy to park and to manoeuvre and will have a bit of get up and go from the engine. The modest power output doesn’t faze me at all as I imagine this car is going to weigh next to nothing. As a city car or commuter, I think it will have real appeal.