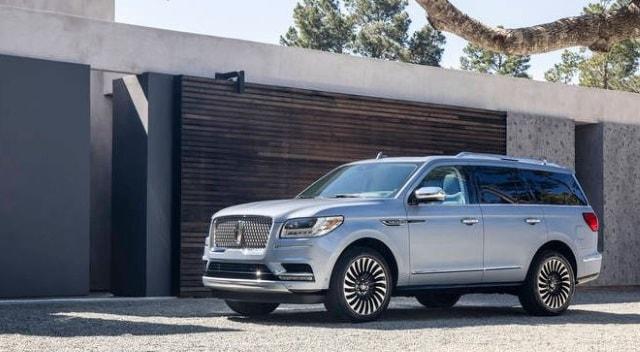 The new design is bold to say the least. With the main interest being at the front. A huge grille, big pair of lights, strong lower fascia, tall hood and squared-off profile. It looks completely of the time and is going to prove very popular indeed. It also stays fairly true to the concept, with only the gullwing doors absent from the production model.

The chassis is based on a Ford Expedition with the luxury turned up to 11. Lincoln have promised a first class passenger experience with unrivalled cargo space. Quite the claim but from what we saw at the show, one the 2018 Lincoln Navigator will live up to.

Once inside, it is typical Lincoln luxury everywhere you look. There are three rows of seats, with Perfect Position seats available up front. A startlingly simple dashboard and centre stack surprise up front. Relatively few dials and switches are evident, instead you see an LCD instrument panel with configurable display and a 12 inch centre screen that controls many aspect of the SUVs operation.

Lighter and stronger
Lincoln have gone the aluminium route for the 2018 Lincoln Navigator. Despite its obvious size, the lighter body shell means the SUV is over 200 pounds lighter than its predecessor. That allows the still sizable vehicle to drive better than you might think.

The twin turbo 3.5-litre EcoBoost V6 engine produces 450 hp and sends power to all four wheels via Ford’s well proven 10 speed automatic transmission. The combination of lighter weight and a smaller but more powerful engine should deliver more sensible gas mileage than an SUV of this size really should but Lincoln have yet to release specifics so we will have to wait and see on that one.