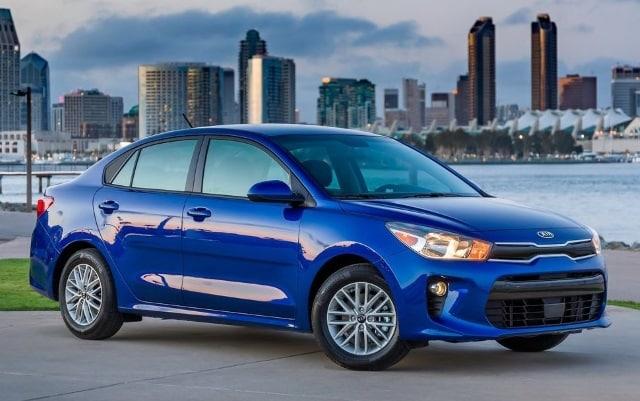 We also got to see the new 2018 Kia Rio Sedan while watching the New York Auto Show. This was a model I didn’t see coming but I actually like what I see. The standard Kia Rio has been stretched out, refined and tweaked until we get quite the new Kia, with a trunk.

The new design takes the original front end of the Rio and tweaks it a little. The tiger nose is still front and centre but has been narrowed slightly. The swept back headlights are typical of the current Kia range and look the part on this new design. A large lower intake seem slightly at odds with the narrower grille but seem to work, especially with the detailing at each end underneath the fog lights.

2018 Kia Rio Sedan
The 2018 Kia Rio Sedan sits on an all new platform that is slightly longer than the current one. It uses new materials and suspension geometry to provide a much more stable driving platform and better handling according to Kia. The new platform allows the Kia to sit a little lower, which will also contribute to that ride quality.

New MacPherson struts keep the front stable while torsion bar rear suspension should offer the comfort and agile handling. Finally, the wheels have all been moved more toward each corner to add further to those characteristics.

Inside, the cabin offers more space than the hatch thanks to being longer and the new roof configuration. An uncluttered dashboard draws the eye immediately with a layer of coloured trim running the width of the car through the centre. A simple instrument cluster and steering wheel with controls is all you need while an LCD screen in the centre stack takes care of everything else.

Under the hood is the existing Gamma 1.6-litre four cylinder engine that produces 130 hp and 119 lb-ft of torque. The car will use either a six speed manual or automatic transmission that sends power to the front wheels. We know this engine from other Kia models and it works well. Gas mileage is more than competitive and the engine itself is responsive and reliable.

Overall, the 2018 Kia Rio Sedan looks to be a viable evolution of the theme. The addition of a sedan variant offers options and the potential to offer a sportier version of the standard sedan. The design could certainly handle it!

The 2018 Kia Rio Sedan should be on sale sometime this fall. Prices and exact dates to follow. In the meantime, visit Georgetown Kia, 199 and 314 Guelph Street, Georgetown, Ontario for the latest deals on a huge range of new and used Kia models.