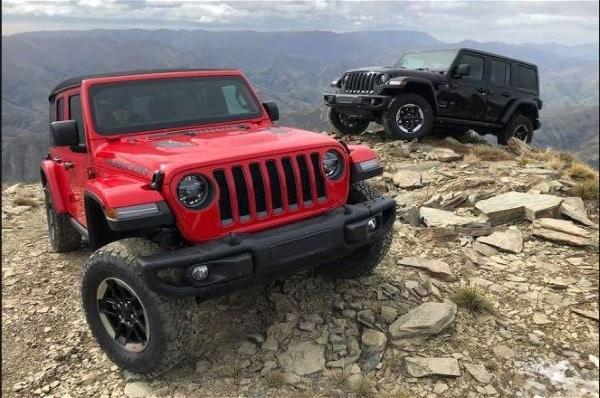 We have seen and heard a lot about the 2018 Jeep Wrangler before the LA Auto Show but now we have seen it for real. Jeep look to have done a lot of work on their flagship and I think it looks excellent!

I don’t envy Jeep one bit. The Wrangler is one of the most iconic vehicles in North America with a fanatical following. Change it too much and you risk alienating these fans and losing a very productive and lucrative user base. Don’t change it enough and the Wrangler risks becoming irrelevant and a dinosaur of a bygone age.

Fortunately, the 2018 Jeep Wrangler looks like it balances both priorities.

Evolution of design
As we have seen, the 2018 Jeep Wrangler has evolved rather than been revolutionized. It is still instantly recognizable as a Jeep, yet has changed enough to be worthy of the new JL model name. The front end is more upright but still has the signature slots. The headlights are still rounded but have now been integrated into the front fascia. The turn signals are now on the fender rather than by the headlights and the rear lights have grown slightly in this model.

For existing fans, the Wrangler still has a fold-down windshield and a hard top, soft top and new power top. The passenger doors can still be removed and the spare tire is still on the back.

Inside, the Wrangler sees a new interior that combines the ruggedness of the original with some comfort and technology. We have already shared an internal image so you know what things look like there. Suffice to say, it looks a much nicer place to be than previous models.

Under the hood
Existing Jeep fans will be happy to hear that the immensely capable Pentastar V6 is still in play. The 3.6-litre V6 engine produces 285 hp and 260 lb-ft of torque. It uses a six speed manual or eight speed automatic transmission.

But that isn’t all. There is also a 2.0-litre four cylinder engine option. It is a turbocharged four with a sort-of hybrid system to deliver 270 hp and 295 lb-ft of torque. The sort-of hybrid part is because the engine utilizes a belt-driven generator and a 48V battery to help power it. It uses an eight speed automatic transmission.

There is also a diesel version coming to a Wrangler near you in 2019. Jeep have promised a 3.0-litre turbodiesel unit for torque lovers that should arrive at some point in the future.

I think the changes coming in the 2018 Jeep Wrangler are going to go down very well indeed. It should hit dealerships very shortly so keep an eye on Unique Chrysler Dodge Jeep Ram, 915 Walkers Line, Burlington, ON  L7N 3V8.