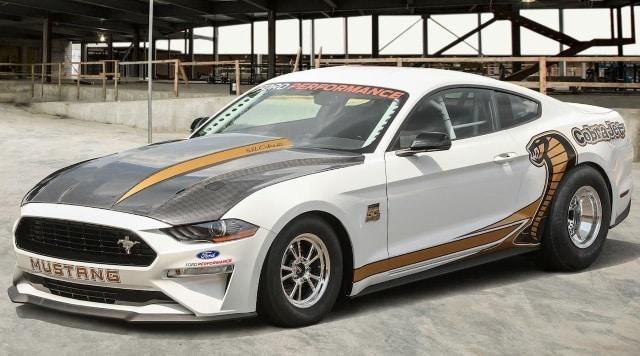 If you have ever fantasized about being a racing driver but didn’t have a team to build you a car, your wait is over. The new 2018 Ford Mustang Cobra Jet has just been announced and Ford have created it race-ready out of the box.

The 2018 Ford Mustang Cobra Jet continues an historic nameplate in its 50th year of operation with this model. To celebrate half a century, this sixth generation Mustang is Ford’s most powerful production car ever. Considering just what comes out of the Mustang factory, that’s quite a claim!

Cobra Jet
The 2018 Ford Mustang Cobra Jet is built for drag racing and is a turnkey car ready for the strip. It has already been certified for use by The US National Hot Rod Association, National Mustang Racers Association and National Muscle Car Association. We expect Canadian race organizations to follow suit at some point.

Under the hood is a 5.2-litre Coyote V8 engine that features a Whipple supercharger and lots of other tweaks they haven’t told us about. Neither has Ford published the figures for this engine but says it will do a quarter mile in less than 8.5 seconds and will exceed 150 mph.

The car looks the business. It has taken everything that is special about the Mustang and supercharged it. The look is mean while still honouring the donor car. The Coyote engine is a known entity and has been proven to be powerful and reliable in equal measure. While this one has been tweaked with new supercharger and likely lots of other modifications, the core is still Coyote.

Only 68 of these will be made to honour the year the first one was released. They have been priced at $130,000 US with no Canadian equivalent as yet. There is no release date or guaranteed Canadian release data yet either.

If you don’t want a drag-oriented Mustang, head over to Northway Ford. They have all kinds of new and certified used Ford Mustang in all their glory. There is sure to be one you could love there!