2018 Ford Fiesta spotted in the wild

2018 Ford Fiesta spotted in the wild 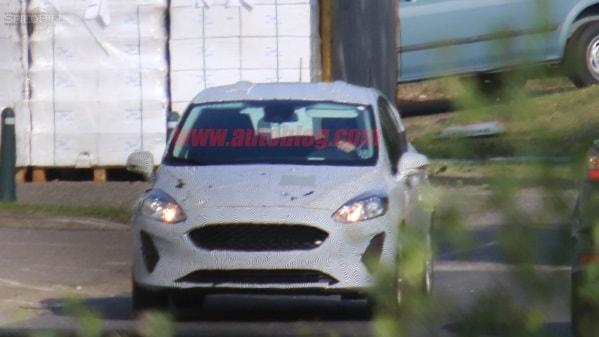 The guys at Autoblog got hold of some images of the upcoming 2018 Ford Fiesta out testing. While only mildly disguised, the new subcompact car looks more like a Focus or Fusion than ever before. It gives us a decent insight into the new small Ford that we haven’t had before.

First impressions show the 2018 Ford Fiesta with a new front end, with large grille like its larger siblings, some side vents or holes for LED lighting and a lower air dam. This could either be more camouflage or a sportier body style. The lights are similar to the existing ones but also a bit different being less angled and shorter.

Two lines traverse the roof but it’s difficult to tell whether this is camouflage or something else. Other than that, the size and shape is similar to the existing Fiesta. At the back there is an element of both S-Max and VW Sirocco about the lights and rear screen offering quite a bit of interest for the eye. We can’t wait to see it in the flesh!

2016 Ford Fiesta
The 2016 Ford Fiesta is an excellent city runabout. It’s at its happiest zipping around city streets and getting into awkward spaces that other cars cannot reach. It’s a great little car with some very good engines, a fantastic cabin and lots of features. It is also a car that shoots way above its weight.

The Fiesta only arrived recently but it has been widely accepted as a superb little car. It has enough interior space to seat four in comfort while also being small enough to be able to drive anywhere. While available as a sedan and hatch, it is the latter that is selling the most with sporty versions doing particularly well.

The design is modern, sleek and definitely Ford. The shark-like front grille, angled lights and low front end are typical of the new Ford family design. A raked windscreen and sloping roof curve down into the rear hatch or trunk depending on which model you buy.

On the inside, the cabin is of a much higher quality than you might expect at this price. Materials are top quality, finishing is very good indeed, the layout is logical and comfortable and there are lots of technological features to choose from. Again, the Fiesta manages to shoot way above its weight.

The 2016 Ford Fiesta is a top quality subcompact that doesn’t come with the compromises you might think. Visit Northway Ford Lincoln, 388 King George Road Brantford ON N3S 3N2 and see for yourself!