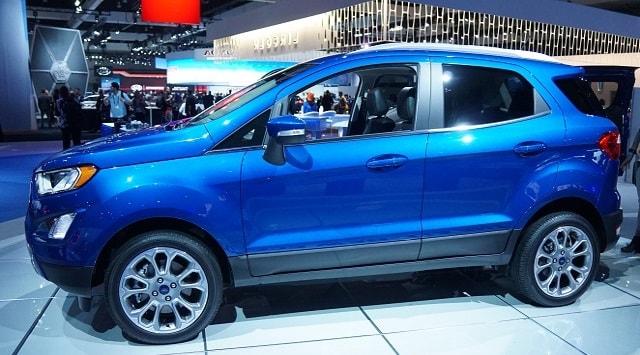 Alongside the 2018 Kia Rio, 2017 Kia Cadenza and the 2017 Kia Niro at the 2017 Montreal Auto Show is the 2018 Ford EcoSport. It is a compact crossover that Ford hopes will take over the segment. Launched a couple of years ago at the 2016 Los Angeles Auto Show, this global model I hoping to make further inroads in Canada too.

The EcoSport is known by other names in other parts of the world and has seen quite a bit of success. It’s a crossover that only wants to help families get around. It has no pretensions of being anything other than a very capable and comfortable crossover and in both of these two qualities, it does well.

2018 Ford EcoSport design
The design is chunky but soft. It has a large profile but isn’t imposing with it. The hood is high, the front grille substantial and with a very raked windshield and curved roof, it has a very refined profile. As is common with modern Ford’s, even panel has some kind of detailing which adds interest to every angle.

One unique detail is the side opening rear cargo door. It’s an unusual touch that goes back a couple of decades to those early days of SUVs. It adds utility to loading and unloading but demands quite a bit of space to open fully.

On the inside, the cabin is surprisingly spacious given the relatively small footprint. There is enough room for four adults and cargo. While you won’t use the 2018 Ford EcoSport for a family road trip unless you pack extremely light, it will serve perfectly well for everything else.

2018 Ford EcoSport engines
The 2018 Ford EcoSport has a choice of two engines, a turbocharged 1.0-litre three cylinder and a 2.0-litre four. Both will use a six speed automatic transmission that will send power to the front wheels. AWD is an option with the 2.0-litre. Specifications aren’t yet available.

Both engines are designed to minimize emissions while maximizing gas mileage. Both engines are tried and tested in other vehicles so should provide no real surprises within the EcoSport.

The 2018 Ford EcoSport hits production Q1 2018 and will hit dealerships a couple of months after that. In the meantime, Ford have a wide range of crossovers and SUVs to suit every lifestyle. Visit Northway Ford Lincoln, 388 King George Road Brantford ON N3S 3N2 to learn more.