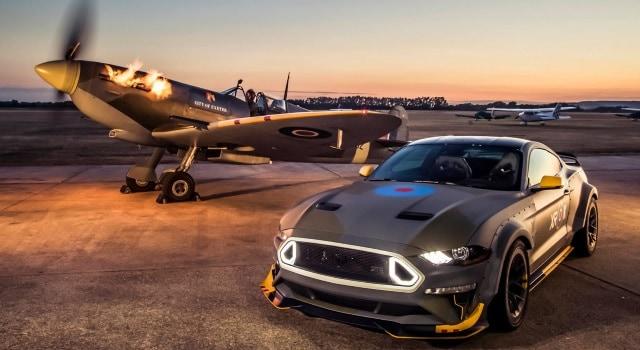 The Goodwood Festival of Speed is always a good watch. From 150 mph lawn mowers to autonomous 1965 Ford Mustangs, there is always something new and a little crazy to see as well as tons of cool cars to marvel at. One of the highlights for me was a Ford, the 2018 Eagle Squadron Mustang GT.

Eagle Squadron was a British Royal Air Force squadron manned by volunteer American personnel. It fought during World War 2 and was formed to allow Americans who wanted to help in Europe to do so before America formally entered the war. Canadians also fought in the RAF with the 242 Canadian Squadron who flew in the first, second and cold wars.

Eagle Squadron was actually three squadrons and, just like the 242nd, accounted well for themselves when they fought. As last week was the 100th birthday of the British Royal Air Force, the 2018 Eagle Squadron Mustang GT made a timely appearance at another British institution, the Goodwood Festival of Speed.

Ford said the badge was made from metal taken from a real Spitfire while the shifter knob was taken from an F-35.

The drivetrain was not standard either. The supercharged V8 engine produces 700 hp and 610 lb-ft of torque. It uses a six-speed manual and an upgraded rear end to help contain the power. The suspension uses Ford MagneRide shocks, Ford Performance lowering springs and RTR anti-roll bars.

The end result is an awesome looking car that looks as though it’s ready for a race. The low slung stance, wide wheel arches, new body kit and those great looking wheels combine to create a car whom you really wouldn’t want to mess with on the road.

The car appeared all week at Goodwood and will be auctioned at the Experimental Aircraft Association's fundraiser in Wisconsin on July 26. As well as this awesome car, the winner will also get an all-expenses-paid trip to the Woodward Dream Cruise in August.

The Ford Mustang GT is an awesome car in every respect, even without the spitfire look. Visit Northway Ford Lincoln, 388 King George Road Brantford ON N3S 3N2 to see it in action.