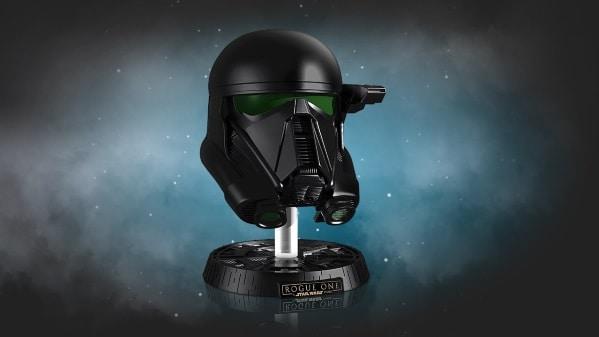 The 2017 Nissan Rogue: Rogue One Star Wars Limited Edition made its promised debut last week at the LA auto show and boy did it ever! Sat underneath a massive model of a Star Wars TIE Fighter, it made a real impact. The new Nissan special edition was almost lost underneath it!

Standing 21 feet tall, the TIE Fighter was the undoubted star of the show. It, alongside some other Star Wars gear was there to highlight the movie and manufacturer tie in that is the 2017 Nissan Rogue: Rogue One Star Wars Limited Edition. The booth also had scale models of the X-wing, Y-wing, AT, ACT (the new walker) and some full size replica Death Trooper helmets, Shoretrooper and Rebel Alliance Special Forces uniforms.

Buyers of the 2017 Nissan Rogue: Rogue One Star Wars Limited Edition get a full size Death Trooper helmet replica as a free gift too. Now who wants one?

2017 Nissan Rogue
Back to business however. The new 2017 Nissan Rogue is cooler than ever even if you don’t go for the special edition. With a new front end, new V grille, new headlights, fog lights, rear LED lights and trim, it looks different enough to be distinct while remaining familiar enough to retain its character.

The Rogue is set to be Nissan’s bestselling vehicle if current sales figures are anything to go by. With year on year increases in numbers, you will be seeing more of these on Canadian roads as time goes on. Given how good it looks, I’m not surprised.

Inside, the usual cabin quality is evident everywhere. The 2017 Nissan Rogue gets a new steering wheel, new centre stack, new shifter and some new materials. Otherwise, the finishing, comfort and interior space is much the same. Overall, it is a very nice place to spend time.

Under the hood is the same 2.5-litre four cylinder that drives the existing Rogue. It is a reliable engine that generates 170 hp and 175 lb-ft of torque and uses the reliable Nissan CVT transmission to drive the front wheels. There is also an AWD option should you require it.

There is also a hybrid Rogue that uses a 2.0-litre four cylinder along with a 30kW electric motor. Combined output is 176 hp, slightly higher than the standard engine to account for the extra weight of the hybrid drivetrain and lithium-ion batteries.

We should be seeing the 2017 Nissan Rogue in our dealerships soon. Keep an eye on Collins Nissan, 155 Scott Street, St. Catharines, Ontario, L2N 1H3 for news of its arrival.