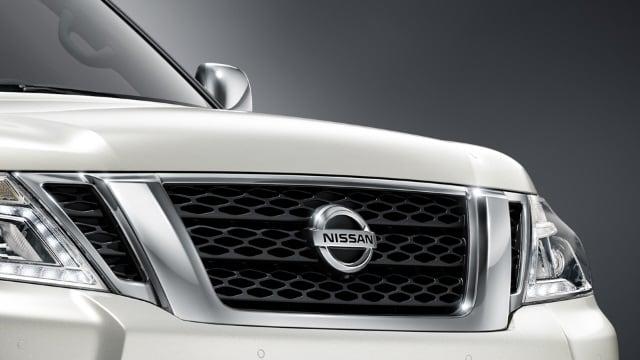 The Nissan Armada is a new full size SUV built on the Infiniti QX80 platform. It looks fantastic, a proper good looking SUV that balances chunkiness with a non-masculine design that will appeal to everyone. Nissan have pulled out all the stops with the design and build and I think it looks fantastic. In fact, I would buy one if I could.

2017 Nissan Armada design
Fans of the Land Cruiser will find some points of interest in this design, as will fans of SUVs in general. The signature Nissan grille is front and centre, as are the typical lighting setup. A nicely shaped lower grill and rounded hood are a bit of a departure though. As is the quite raked windshield.

Simple panels allow the design to shine, while a simple rear end with big bumper and large tailgate round things off nicely. In-between, high ground clearance, large windows and a flat roofline offer a pleasing profile along the length of the vehicle.

Inside, the 2017 Nissan Armada looks on par with its QX80 partner. It is a quality cabin with lots of luxury touches. The seats are adjustable and supportive, the dashboard well laid out and the centre stack fully featured. Space and light are not at a premium inside this SUV and that makes it an ideal family car.

Mechanicals
The 2017 Nissan Armada shares the chassis and drivetrain with the QX80, which is based on the older Nissan Patrol and was used in the Nissan Titan. It’s a solid frame that allows for a body on frame design that is stiff and comfortable at the same time.

The engine is a 5.6-litre V6 called the VK56VD and produces 390 hp and 413 lb-ft of torque. Where it departs that of the QX80 is in its use of direct injection and variable valve timing. This boosts output although not at the expense of gas mileage.

While not primarily designed for off road use, the addition of a two speed transfer case and bash plates underneath and that ground clearance offers some rough driving capability.

First impressions
Until I can take a 2017 Nissan Armada out for a test drive, it’s hard to describe much about the ride. However, the QX80 drives well, as does the Titan. As the engine and chassis have common ground, it isn’t unreasonable to assume the Armada will drive just as well. Nissan has form for creating steady, comfortable SUVs so it’s no great leap to think they will do the same here.

The 2017 Nissan Armada looks like a great full size SUV. I can’t wait to try it!