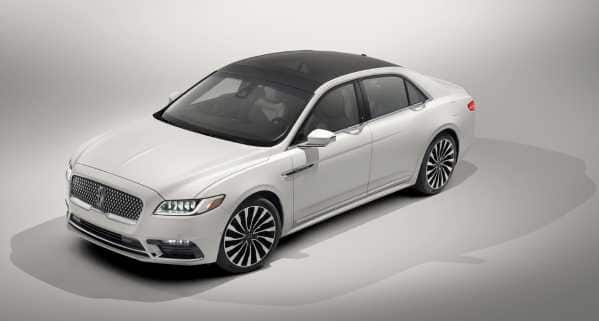 When we read in the dealer literature that the 2017 Lincoln Continental was going to feature something called Approach Detection Technology, we initially thought it was a new safety tech. It sounds a lot like automatic braking which is something all automakers will be phasing in over the next couple of years. Lincoln obviously has other ideas about what Approach Detection Technology means.

According to Lincoln, Approach Detection Technology means an exterior light that automatically detects when the owner is within 8 feet. It emits a pool of light with a Lincoln logo onto the ground while illuminating the door handle in a colour that complements the colour of the car.

The design is modern and very Audi-esque while being original enough to stand on its own two feet. It is an understated design that seems content to not stand out in the crowd and to keep its best on the inside. Talking of inside, the cabin of the 2017 Lincoln Continental is first class.

The spacious interior showcases top quality materials and finishing. The Perfect Position Seats allow just that with 30 different adjustments. Head and legroom are generous and the driving position is about as good as it gets. There is lots of technology too, but again it’s understated and subtle. There when you need it, out of the way when you don’t.

Under the hood is a 3.0-litre twin turbo V6 that delivers 400 hp and 400 lb-ft of torque through a six speed automatic transmission. Other engines may appear. Drive is from the front or all wheels.

As you would expect from a Lincoln, the specifications are almost limitless. There are hundreds of colours, interior options, features and technology you can add to your trim of choice. The Continental will also feature front collision warning with pedestrian detection, automatic braking and a 360-degree parking camera.