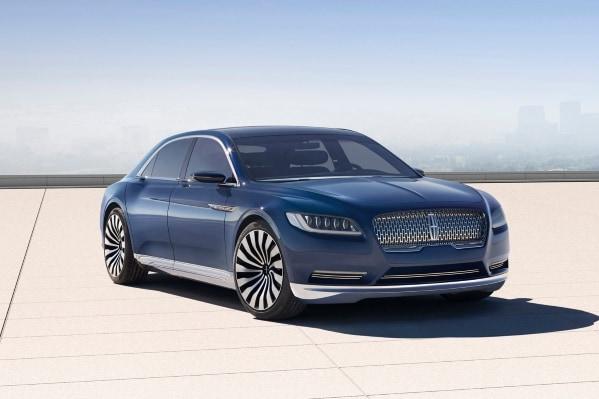 According to Ford, the 2017 Lincoln Continental will be
entering production soon and is expected at Lincoln dealerships a couple of months
after that. There were no specific dates mentioned, but from the publicity
shots we got to see, we are already waiting with baited breath!

The 2017 Lincoln Continental is the production variant of
the concept we saw at the 2015 New York Auto Show. We covered it at the time
and marvelled at its smooth lines, nice shape understated grille and strong
resemblance to the Audi A8. We also said if it hit production looking anything
like that, we would likely want one. Well it is.

The design is simply great. In profile it is smooth and
flows from one end to the other. The smooth front end with large grille and
Lincoln badge is more understated than usual. LED lighting and chrome accents
give an all business look. Rounded body panels, large alloy wheels and more
chrome trim hint at the premium nature of this car.

Inside the 2017 Lincoln Continental is likely to be just as
modern but will need enough heritage to attract existing owners. Some commented
that there wasn't enough wood when they saw the concept, Ford is apparently
addressing that with the production model. It isn't something you would ever
expect us to say, but Ford are on it. There will also be alternatives such as
metal trims for those who don't want the wood.

The 3.0-litre twin-turbo V6 engine that was suspected to
power the Continental has also been confirmed. Ford also confirmed that this
engine will be unique to Lincoln.

According to the Wall Street Journal, production of the 2017
Lincoln Continental returns to Michigan for the first time in nine years.
Production is thought to be planned for Ford’s Flat Rock, Michigan plant where the
Fusion and Mustang are built. Considering the Continental uses the new Fusion
platform, that makes sense.

Let's be honest, the 2017 Lincoln Continental can't come
soon enough. The brand needs a new flagship to drive sales and to bring it back
into the forefront of luxury motoring once more. While the current MKX, MKZ and
MKS are doing well, there needs to be a best-seller. If this design is the one
that hits production, we think it's going to sell very well indeed!