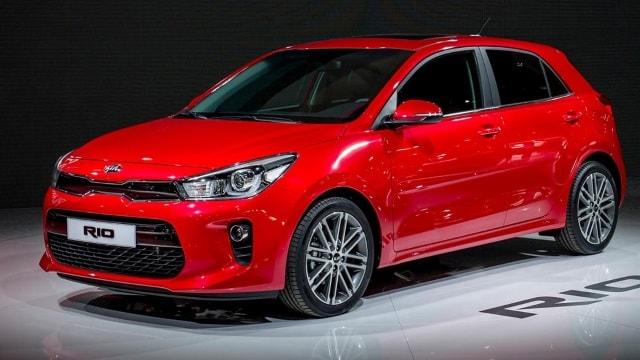 The Paris Auto Show held last week was full of vehicles from most major automakers and was an exciting place to browse and explore. There were a few Car Nation Canada brands there and even though the models were European versions, it gives it a good idea of what we can expect over the coming couple of years over here in Canada. One such vehicle was a new Kia, the 2017 Kia Rio.

I covered the preview of the new Rio ahead of Paris and liked what I saw. Now I have seen it for real, there is a little more to add. The preview showed us the exterior of the car but not a lot of the inside. We only got to see the hatch version of the new Rio but a sedan is supposed to follow at a later date.

The new car is longer, wider and lower than the current model which offers more passenger room inside. While only a few millimetres either way, it all helps stability and interior space. The design is simple and understated just the way I like it. The profile is more upright than before, with a taller stance than the current version.

I mentioned a very VW-like appearance and I stick by that. There is definitely an aura of Golf and Polo about it, especially when you view it in a three quarter view. The rear end definitely has more than a hint of Volkswagen and it looks better for it. Overall, I think the design is an evolution of the theme in all the right ways.

The version we saw also had five doors instead of three. Apparently, there won’t be a three door version as Kia didn’t see the demand for it.

On the inside the unfussy design continues. The dashboard is simple yet comfortable, with a touchscreen in the centre stack position, presumably on higher trim models only. The driving position offers great visibility and the seats look comfortable. Controls are straightforward and are comprised of buttons and switches which I like.

Aside from the new 1.0-litre T-GDi engine that produces either 97 hp or 118 hp, we don’t know what motors will power the 2017 Kia Rio. Euro-spec cars and North American ones often differ, so until I have an accurate report on what we will be getting here, there’s nothing to say.

The 2017 Kia Rio will include plenty of safety tech as you would expect, including a lane departure warning system and autonomous emergency braking with pedestrian detection as an optional extra.
The new 2017 Kia Rio looks great. It’s an improvement in terms of looks, interior space and quality as we would expect. With production slated to begin at the end of 2016, it will be sometime Q1 or Q2 that we begin seeing it in dealerships in Europe. When it will hit Canadian dealerships is still a mystery as yet.

In the meantime, the current 2016 Kia Rio is an exceptional car for the money. Visit Grimsby Kia, 435 South Service Road Grimsby, ON L3M 4E8 to see it for yourself!