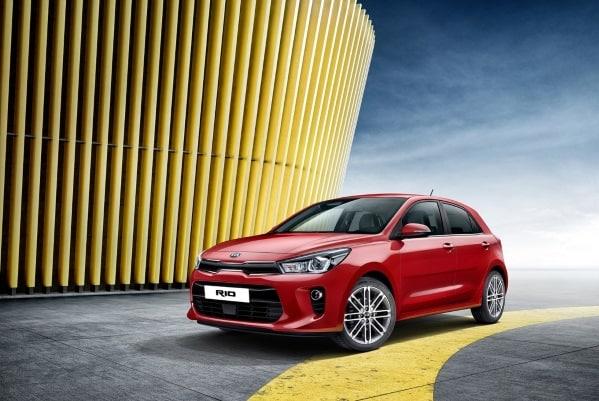 The 2017 Kia Rio has been teased ahead of the Paris Auto Show and it looks good. It takes on a completely different shape and character in this iteration, with a taller stance and a much more mature design. This new little Kia is going to do so well!

While maintaining the current Kia design philosophy, the 2017 Kia Rio looks quite different. As well as a very European vibe, there is a lot of VW in this car. If you have ever seen the Euro-spec subcompact Polo, the new Rio is markedly similar in profile.

The new look is great. It manages to bring a completely new character to the Rio while also continuing the Kia design. The tiger grille is there, the angled headlights too, but a higher front end, a taller windshield and a new rear quarter give it a much more grownup look. It should add to the space inside the cabin too.

Inside, the cabin does look spacious. While we have only seen PR shots so far, it looks to have been brought up a level or two in terms of quality and design. Lots of glass offers great visibility, supportive seating, a tidy driver’s position and small centre stack all combine to deliver a lot of car for its wheelbase.

We don’t know much else about the 2017 Kia Rio as yet but it will be appearing in Paris soon. We shall let you know what we find out!

2016 Kia Rio
In the meantime, the 2016 Kia Rio is performing very well in the subcompact market in Canada with some rave reviews. With lots of technology, more interior space than you would think and amazing value for money, it is a sure thing for anyone in the market for a small car with a big personality.

The design is simple yet elegant. It is modern with enough individuality to allow it to stand out from the crowd. It is still very much a Kia though, with the tiger nose grille, angled headlights, raked windshield and Korean characteristics that we like.

On the inside, the 2016 Kia Rio seems larger than it should be. All that glass not only allows good visibility all round, it also makes the interior seem very spacious indeed. Good seating, surprising levels of head and legroom and good standards of materials and finishing make it a nice place to be.

If you can’t wait to see the 2017 Kia Rio in the Car Nation Canada dealership lots, the current version has a lot to offer too. Visit Grimsby Kia, 435 South Service Road Grimsby, ON L3M 4E8 to see the latest deals.