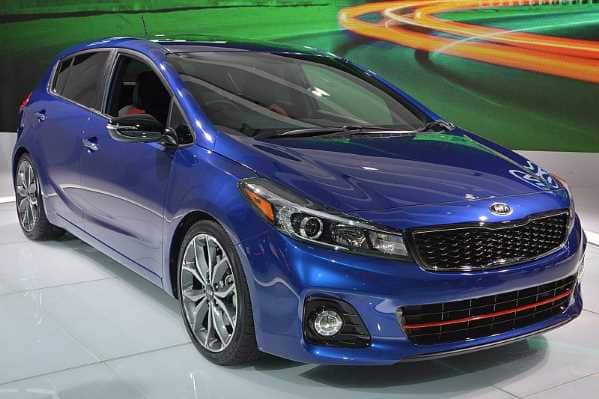 Another highlight of the Detroit Auto Show was the 2017 Kia Forte. With a new design, new technology and new engine, this new Kia gave us a lot to think about. While the Telluride concept may have stolen the headlines, the Forte is still more than worthy of a mention.

The 2017 Kia Forte comes as either a hatch (Forte5) or sedan. Both have been updated, with the hatch seeing the lion’s share of changes. The front end of both cars see a new front grille, new headlights and tidier lower sill. Other, smaller changes are not so apparent.

Also new for the Forte5 is a seven-speed dual clutch transmission that will connect the 1.6-litre turbocharged engine to the front wheels. The 1.8-litre engine in the current model has been changed in favour of a 2.0-litre four cylinder that offers more power. A six-speed manual or automatic transmission will be standard with this engine.

2016 Kia Forte
The current Kia Forte is an excellent little car available as a hatch, sedan or coupe. It is a nice design that offers a sleek profile, long nose, steeply angled windshield, sloped roof and curvy rear end. It is a smooth looking car from whichever direction you view it.

On the inside, the 2016 Kia Forte is more spacious than you might think. A well-considered cabin offers lots of passenger space and a commanding driving position. Quality materials add a premium feel while models with the UVO touchscreen are elevated even higher. Seats are comfortable, there is plenty of head and legroom and cargo space in back is pretty good too.

The 2016 Kia Forte is available in EX, LX and SX trims. Not all trims are available across all shapes. Standard features on the LX includes 15 inch wheels, air conditioning, power everything, CD audio, heated mirrors and adjustable driver’s seat.