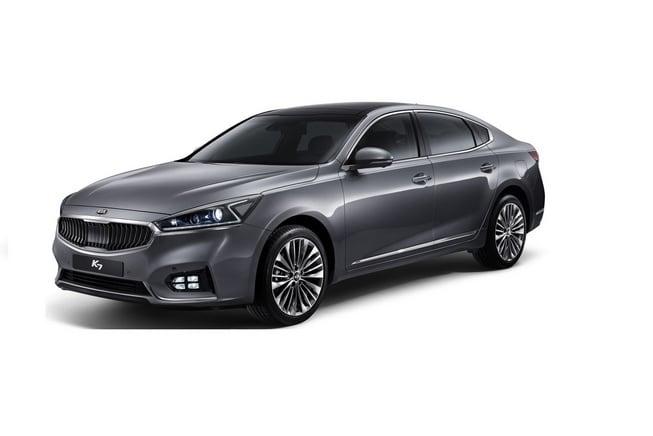 Kia has previewed the new 2017 Kia
Cadenza in advance of its appearance at the Detroit Motor Show in January 2016.
The sharper design looks great and should appeal to a wider range of buyers
than it does already. We like it!

The preview
images actually show the Korean version, the K7 but we have been told that the
one coming to Canada will be identical in every way except the name.

The 2017
Kia Cadenza looks longer, lower and wider than the current model with the
redesign making for a very masculine, handsome car. There is a definite move
forward in terms of design from Kia, with the tiger nose grille being front and
centre, steeply angled headlights and lower fascia bringing it into line with
other new Kia models.

The
detailing on the hood adds interest while side sills and an angled waistline
draw the eye down the length of the car. A raked windshield, curved roof and
tight rear end complete this very tidy package. It is a very nice car to
behold.

The Cadenza
is a relatively new model to our shores, having been introduced in 2013. It is
a full size sedan designed to appeal to those buyers who like to be different while
also benefitting from lots of technology and a very refined drive. It has been
designed to compete with the likes of the Ford Taurus and is a credible
alternative to mainstream brands.

The current
3.3-litre V6 engine produces 293 hp and 255 lb-ft of torque. The engine and the
six speed automatic transmission that comes with it are expected to carry over
into this model. It is a very smooth engine, offering an accomplished ride and
permanently engaged paddle shifters.

The current
model Cadenza is slowly converting buyers with its good looks, huge features
list, wide variety of options, great drive, good looks and competitive price.
It is a great car. We know because we have driven it. Surprising is an
understatement!

The cabin
is a truly nice place to be. It is spacious, quiet, refined and stuffed full of
features. A supportive driving position with controls within easy reach is the
least of it.

We like the
2016 Kia Cadenza and think the new model improves on it. It’s a luxury car
without the bling and baggage that comes with a badge. One for those who want
to enjoy quality without having to advertise to the world what they like.