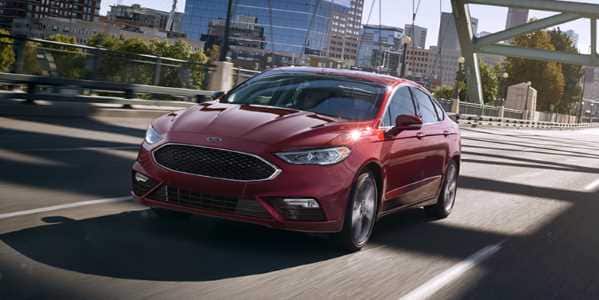 The long-awaited 2017 Ford Fusion made its debut at the NAIAS last week and proved very popular indeed. Particularly the new engine, a Ford EcoBoost V6. A hybrid version was also revealed, offering the same look with a more eco-friendly powertrain. Two new trims also make an appearance, the Sport and Platinum.

What is most exciting is that the 2017 Ford Fusion Sport is being referred to as a ‘sleeper.’ An ordinary looking car with hidden performance. The kind of car you can hit the commute in and then blast down a more scenic highway when the mood takes you.

On the inside, a new layout offers a midcycle upgrade for drivers and passengers alike. A rotary shifter adds a little more space in the centre console, while Sync 3 sits comfortably in the stack and offers Android Auto and Apple CarPlay compatibility. New interior upholstery options are also available while the new Platinum model offers unique trim and interior and exterior options.

2017 Ford Fusion powertrains
The existing 1.5-litre and 2.0-litre EcoBoost and 2.5-litre four cylinder engines are still available across the range. The new 2.7-litre V6 is the big news though. Capable of generating 325 hp and 350 lb-ft of torque and available with all-wheel drive, we think it’s going to be very popular indeed!

The 2017 Ford Fusion Hybrid comes with a combined gasoline engine and electric motor with lithium-ion batteries. The hybrid can be plugged in and owners will be able to use the MyFord Mobile app to monitor and schedule charging on demand.

The 2017 Ford Fusion Platinum upgrades the car with a unique front grille, different 19 inch alloy wheels, upgraded interior with two different types of leather, lots of technology and plenty of luxury. Expect just about every option box to be ticked as standard.

We are looking forward to getting one of these in the dealership and putting it through its paces. Keep an eye on Northway Ford Lincoln, 388 King George Road Brantford ON N3S 3N2 for developments!