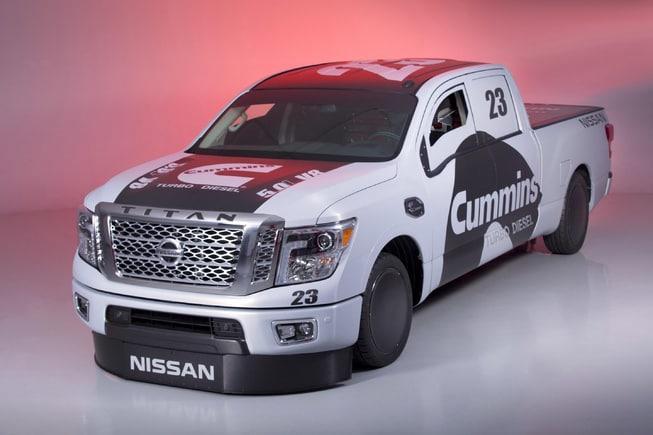 Another
highlight of this year’s SEMA show was the Nissan Titan. Specifically, the
modified version made in conjunction with Cummins. Named triple nickel after
the 555 lb-ft torque rating of the standard Titan XD, this project is designed
to smash some land speed records.

The project
is apparently only a few weeks old but already a lot of ground has been
covered. The team has already added lowered suspension, wheel covers, Mickey
Thompson tires, an Ultra Shield seat, a Stroud Safety parachute, custom front
air dam and bed covers and a custom brushed nickel-coloured body wrap. There is
more to come with roll cage, more safety and tuning tweaks.

The press
release had this to say:

"Cummins
and Nissan have had an innovative partnership for more than five years, with
excellent results, including the award winning powertrain for the all-new 2016
TITAN XD truck," said Jeff Caldwell, general manager of Global Pickup
& Van Business, Cummins.

"Our
working teams have been discussing a land-speed record racing project for some
time now, and we are thrilled to debut this truck at the 2015 SEMA Show. Our
founder, Clessie Cummins, would be proud of the volunteers willing to spend the
time pushing his diesel to its limits."

“Nissan
also has a history in land speed record racing, most recently with a 1994
"Hardbody" compact pickup truck, which raced at El Mirage and
Bonneville. That truck set multiple records in the mid-1990s for a
four-cylinder truck, most notably a run of 142.9 MPH on the salt flats.”

So both
Nissan and Cummins have pedigree when it comes to land speed records. Chances
are good that it could break the two in question, bringing the Nissan Titan
with its Cummins diesel firmly into the public gaze. Given how partisan many
are towards their trucks, anything Nissan can do to promote what is an
excellent vehicle is a good thing.

The diesel
in question is the Cummins 5.0-litre V8 that sits inside the 2016 Nissan Titan.
It delivers 310 hp and 555 lb-ft of torque from its twin turbos which it
controls through a six speed automatic transmission. It’s a solid powerplant
that will provide many, many years of faithful service.