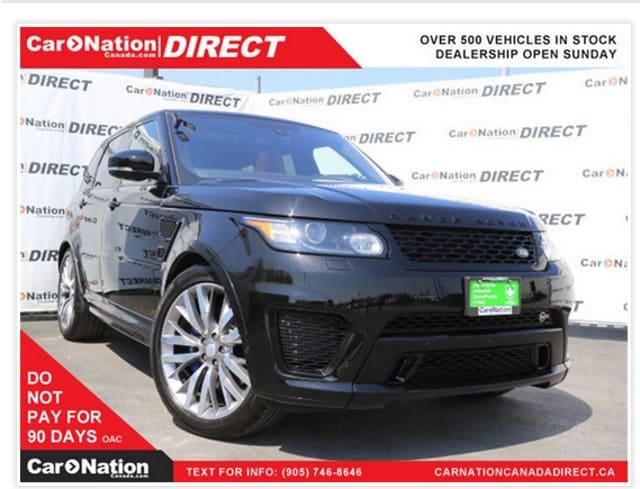 Car Nation Canada Direct has a 2016 Land Rover Range Rover Sport SVR in stock right now. This is one of the most powerful, and most rare SUVs anywhere in the world and we have one in our Burlington lot. If you want to enjoy luxury, speed and brand cache that few other vehicles can match, this is the SUV for you!

The 2016 Land Rover Range Rover Sport SVR is a beast. Not only does it look fantastic but it has done something with a V8 that few other SUVs can do. It extracts 550 hp and 502 lb-ft of torque from it and keeps it controllable and comfortable even with the foot to the floor.

2016 Land Rover Range Rover Sport SVR design
The standard Range Rover is the SUV to beat in the design stakes. It not only looks like a premium SUV, it has an inherent appeal that very few people can ignore. It takes the SUV shape and turns it into a work of art. The SVR takes it one step further with a trimmed back exterior, subtle badging and black trim.

The cabin echoes that simple modernity and adds a plushness that increases comfort and satisfaction. With 14-way powered seats, Oxford leather everywhere, an intuitive centre stack with touchscreen and a 19-speaker premium audio system, there is a lot to make you feel special.

As you would expect, the feeling you get while inside the 2016 Land Rover Range Rover Sport SVR is one of exclusivity and comfort. Many luxury SUVs give you comfortable surroundings, but few can add that exclusive touch. It is as intangible as it is invaluable.

Engine and mechanicals
While the skin is great to look at, the 2016 Land Rover Range Rover Sport SVR is all about performance. To achieve that, the SUV features a supercharged 5.0-litre engine that generates 500 hp and 502 lb-ft of torque. With a maximum speed of 260 km/h this vehicle can get you anywhere quickly. To add a little fun to proceedings, the SVR features active exhausts which improves performance and the noise coming out back.

To help keep the ride smooth and the vehicle safe on the road is a specially tuned chassis and Land Rover’s  two-channel Dynamic Response system which uses air suspension and variable dampers to keep things flat and level regardless of the road. Big Brembo brakes offer even more control over all that power.

If you’re in the market for one of the most exclusive SUVs anywhere in the world, the 2016 Land Rover Range Rover Sport SVR is the one to beat. Visit Car Nation Canada Direct, 4315 N Service Road Burlington, ON L7L 4X7 and see the one we have in stock. Move fast as it won’t be here long!