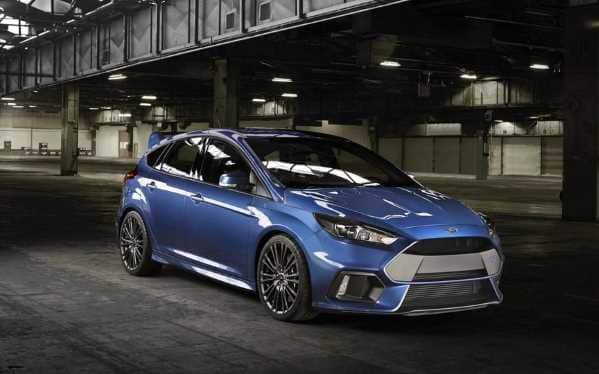 Details for the 2016 Ford Focus RS have been released to the
public at long last. A sigh of relief could be heard across Canada as the new
numbers delivered on their promises and a new video appeared showing the Ford hot hatch in
action.

We got a hint of what was coming after that debacle on the
Ford website a few months ago. After all that was cleaned up we had to wait
until the official release to see if what we saw would become a reality or not.

So what do we know? We know the U.S. pricing but not the
Canadian as yet. We expect it to land somewhere between $35-40,000 mark though.
We also know that the 2.3-litre EcoBoost engine will make its appearance. The
four cylinder motor will deliver 345 hp and 350 lb-ft of torque.

Back when we first saw the marketing material for the 2016
Ford Focus RS, Ford had said their engine developed "more than 315
hp". Now we know it's quite a bit more than that. Torque can also increase
too. The Focus RS will come with overdrive, which can temporarily boost torque
upwards for 15 seconds.

The 2016 Ford Focus RS will use a six-speed manual
transmission to send power to all wheels via Ford's very clever all-wheel drive
system. The new system is very impressive indeed and features an awesome torque
vectoring setup that can deliver power to any wheel at any given time. It also
has launch control which could prove a lot of fun.

The 2016 Ford Focus RS was developed in conjunction with RS
development consultant Ken Block. So it's no surprise that the car comes with
different driving modes, including a drift mode.

As well as offering serious performance, the 2016 Ford Focus
RS also delivers more power than its main rivals, the Golf R and Subaru WRX
STI. It is similarly priced too.

The 2016 Ford Focus RS goes on sale in the spring of 2016
and if pre-order queries are anything to go by, will sell fast as well as drive
fast. We can't wait to get one in the dealership so we can see it for
ourselves!

Keep an eye out for the 2016 Ford Focus RS at Northway FordLincoln, 388 King George Road Brantford ON N3S 3N2.