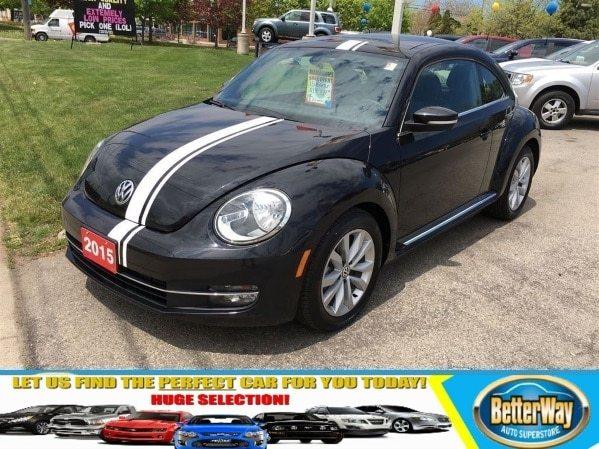 This week’s featured vehicle at Betterway Auto Sales is the 2015 Volkswagen Beetle Coupe. A classic car made modern and a respectful nod to tradition while being up to date and a lot of fun.

The Volkswagen Beetle is an iconic car that has run for decades while changing little in character and a lot in technology. Sit a 2015 Beetle next to one from the 1950s, 60s or 70s and you will see a definite similarity in terms of looks, character and that elusive charm that very few modern cars manage to capture but which the Beetle has in spades.

2015 Volkswagen Beetle
The 2015 Volkswagen Beetle Coupe is the hardtop version of the vehicle that continues the traditions started all those years ago. With great interiors, decent engine, composed handling and a character that no other car comes close to, there is a lot to love about a Beetle. Whether you were around in the 60s to enjoy their heyday or are new to the Beetle, this is a great option.

The design is modern and vintage at the same time. While there is a more than respectful nod to its heritage, the current Beetle has a foot firmly in the modern age too. I can think of no other car aside from the Dodge Challenger that manages to combine modernity and heritage in this way, so successfully.

On the inside, the cabin build quality is exactly what you would expect from VW. Materials are top class and finishing is excellent. Styling is minimal and functional and is the better for it. The Beetle seats four in comfort and while two door, the rear is accessible even to adult passengers.

The standard engine on the 2015 Volkswagen Beetle is a 1.8-litre turbocharged four cylinder. It generates 170 hp and 184 lb-ft of torque and uses a six speed automatic transmission. The engine delivers plenty enough power for its weight and the transmission is as slick as you would expect from the company that invented the DSG gearbox.

To keep you safe, the 2015 Volkswagen Beetle comes with traction and stability control, antilock disc brakes, front side airbags, side curtain airbags and Volkswagen's Car-Net telematics. Car-Net is like Onstar and provides emergency or roadside assistance and can help locate the car should it be stolen. It is also the proud owner of five stars in U.S. crash testing too.

The 2015 Volkswagen Beetle is a great little car. It drives well, looks great and blends fun and practicality into one tidy package. Visit Betterway Sales & Leasing, 289 HWY #8, Stoney Creek, ON, L8G 1E5 to see it for yourself!