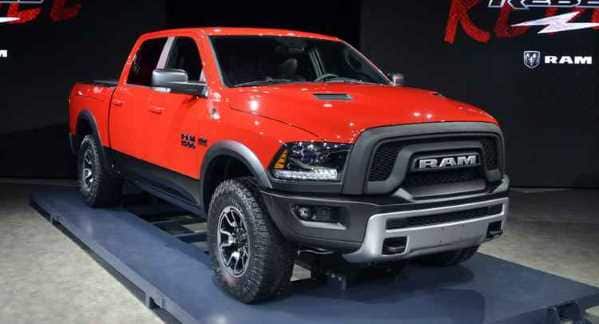 According to Ram, the Rebel will first appear at the
Overland Expo in Arizona tomorrow, (Saturday May 16th) before it
hits dealerships in July. We got a glimpse of it at Detroit in January and we
liked what we saw but we really would like to see it in action. The Overland
Expo is the perfect place to do that.

The 2015 Ram 1500 Rebel is Ram’s answer to the Ford Raptor.
It’s a performance off-roader with serious chops in both design and capability.
It uses a Ram crew cab as its base, with the 3.5-litre V6 engine. That engine
has been tuned to 305 hp and 269 lb-ft of torque and is bolted to an eight
speed automatic transmission.

Of course, there is the option for a Hemi engine, which we
expect to be most popular. This version is the 5.7-litre V8 which is good for
395 hp and 410 lb-ft of torque. We think this is much more at home with the 2015
Ram 1500 Rebel and will likely be the engine of choice for most owners.

Design-wise, Ram have really changed things up. Rather than
the signature chrome grille, they have gone black. A black grille, black
bumper, black side sills, trim, hood vents, rear Ram badges and twin pipes all
add to the cache. A chrome sump protector completes the look.

On the inside, the design trend continues with largely black
materials with red stitching. A unique tire print from those Toyo tires are on
the seats, the centre stack has been tweaked and there are small Rebel design
signatures too. That centre looks good, although we didn’t get much of a look
at it at Detroit.

The 2015 Ram
1500 Rebel certainly looks the part. The combination of red and black is an
awesome colour scheme, the Hemi engine is a powerhouse as we well know and that
interior looks fantastic.