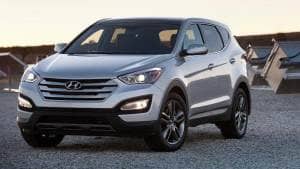 A 2015
Hyundai Santa Fe versus 2015 Ford Escape was inevitable as the two automakers
are trying to attract the exact same market with their crossover SUVs. Both
offer great value for money and an excellent package overall, making it
difficult to choose between them.

There are
two versions of the 2015 Hyundai Santa Fe, a two row four-cylinder version and
a three row V6. The four cylinders come as a 2.4-liter gas engine and a 3.3-liter
V6. Each is connected to a six-speed automatic transmission to send power to
the front or all wheels. The 2.4-liter delivers 190 hp while the V6 gives 290
hp.

There is a
lot to be said about smaller engines that can give a lot, but we naturally prefer
larger engines that don’t have to work quite so hard in our SUVs.

This part
of the 2015 Hyundai Santa Fe versus 2015 Ford Escape debate is very subjective,
but we’ll say right off the bat that we prefer the looks of the Santa Fe. It’s
much slicker, more modern and doesn’t look like someone has stretched a Ford
Focus in AutoCAD and then manufactured it.

With the
right color and the right wheels, there are few crossover SUVs that can look as
good as the Santa Fe.

Both offer
great use of space, plenty of head and legroom, lots of technology and a
quality that belies their price. We particularly like the center stack of the
Santa Fe, which works better than that of the Ford.

On the
road, both the 2015 Hyundai Santa Fe and 2015 Ford Escape have great handling,
decent power on tap and don’t feel cumbersome like many SUVs. They drive like
cars, park like cars and offer all the benefits of a car while hauling like an
SUV, almost.

There is
little to choose between them except the V6 version of the 2015 Hyundai Santa
Fe seems a lot more composed and comfortable at highway speeds than the Ford.
It’s quieter, less revvy and seems to be happy quietly pulling you along
without breaking a sweat. That makes it the clear winner for us!