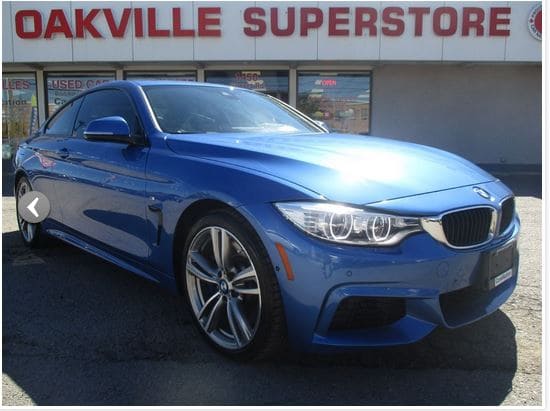 Oakville Used Car Superstore currently has a 2014 BMW 435i xDrive for sale at a very good price. The 4-series is a relative newcomer to the BMW stable but made quite the impact from the moment it was introduced. This version has the 3.0-litre straight six engine which is one of the best sixes available anywhere in the world.

The BMW 4-series is a splinter of the classic 3-series sedan. BMW decided to split the series in two, keeping the wagon and four door sedan as 3-series and splitting all coupes off into its own, 4-series. While it doesn’t make much difference in the real world, it allows the two series to go their own separate ways.

BMW 4-series design
As you might expect, there are a lot of similarities between the 3 and 4-series. The long curved hood and small front end are now the signature of all BMW sedans. An aggressive fascia with turned in headlights creates quite a masculine look but not enough to turn female buyers off.

The long hood meets a raked windshield and very curved roof to finish at a modest trunk and tidy read end. Each panel on the car has some kind of detailing that adds visual interest at every angle.

The cabin is spacious and well appointed. Materials are top quality, seats are very comfortable and everything has an aura of both performance and class. Switches are solid and reassuring, the wheel gives you confidence while the instruments ensure you always know what’s going on.

435i xDrive
The 2014 BMW 435i xDrive uses the world famous straight six engine from Bavaria. It is a 3.0-litre inline six cylinder with DOHC and turbocharger that delivers 300 hp and 300 lb-ft of torque through all wheels. It also uses a six speed manual or eight speed automatic with manual mode.

The engine is smooth, lively and quiet. Like most BMW engines, it is happy running at low revs saving gas or being given full throttle through bends. The drive is refined and the engine very capable indeed. Both transmissions offer smooth shifts with a lot of feedback. As the auto has a manual mode, it doesn’t feel like you’re missing out either.

xDrive denotes all-wheel drive so this is definitely a sedan that is more than up to the task of surviving Canadian winters.

The model being offered at Oakville Used Car Superstore features navigation, a sunroof, keyless entry and ignition and the best colour available from BMW, metallic blue which means it won’t be here for long especially considering the price!