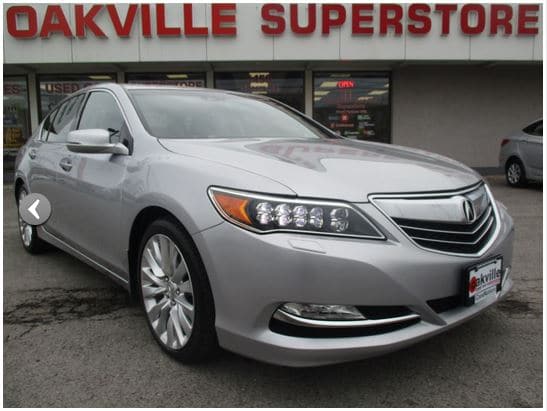 This week’s featured car is the 2014 Acura RLX. Currently on sale at Oakville Used Car Superstore, this midsize luxury sedan has a lot to offer in a great looking package.

Acura have always been the quiet contender, willing to let their cars speak for themselves and the 2014 Acura RLX is no different. Released as a new model in 2014 to very little fanfare, this midsize sedan has a lot to offer the savvy buyer.

2014 Acura RLX design
The 2014 Acura RLX is a very understated car. The design is simple and often slips under the radar. Yet it is quietly composed and great to look at. It’s a mature design with none of the flourishes other automakers add to every panel, yet still strikes a chord.

The Acura grille takes centre stage up front with the signature headlights with individual lenses either side. A sloped hood meets a very raked windshield and continues over a sloped roof to the trunk. A simple rear that continues the minimalist look rounds out the package.

On the inside, the cabin is nicely put together. Like the exterior, the interior is quietly competent without feeling the need to shout about it. The driving position is comfortable, gauges clear to see and everything is within easy reach. As this model has navigation, the centre stack is fully featured too.

Under the hood is a 3.5-litre V6 engine that produces 310 hp and 272 lb-ft of torque. This is ideal territory for a midsize sedan. Enough to be comfortable but not too much that it becomes cumbersome. It sends power to all wheels via a six speed automatic transmission with paddle shifters.

One signature of the 2014 Acura RLX is all wheel steering. The Precision All-Wheel Steer, or P-AWS system takes a little getting used to but is an excellent addition to the car once you do. It seems an unnecessary frivolity given that this car has no sports or performance pretensions, yet once you get used to cornering with it, offers much smoother lines through the bends.

Visit Oakville Used Car Superstore at 1450 Speers Road Oakville, ON L6L 2X6 to test drive the 2014 Acura RLX. It won’t be around for long!