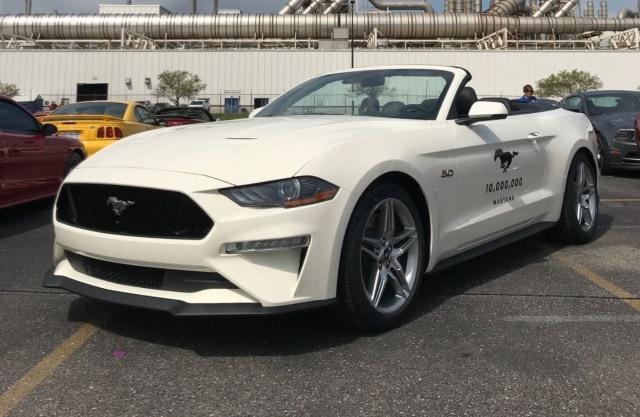 Most cars will hit six figure production numbers if they are lucky. Some may hit seven figures if they are exceptional but few will ever hit 8 figures. The Ford Mustang just has hit that magic mark as the 10 millionth Mustang rolled off the production line last week.

The Mustang has been in almost constant production for 54 years. In that time we have seen lots of reinventions, hundreds of iterations and some truly lovely and a couple of horrendous designs. Fortunately it has been more of the former than the latter but the eighties were not a good time for most car designs. Ford wasn’t exactly alone with that!

The 10 millionth pony car was apparently this Wimbledon White version of the 2019 GT convertible with V8 and manual transmission. The decal on the site is removable.

As part of the celebrations, Ford invited owners of all generations of Mustang up to Flat Rock to join in the festivities. Owners from every model of Mustang attended and arranged their cars to spell out 10,000,000 on the parking lot.

2018 Ford Mustang
There is a very good reason why the Mustang has endured. It is one of the few cars that has appealed to its demographic in the right way at the right time over time. Some of the classic designs still appeal to new buyers today and change hands for many times more than they cost new. The combination of style, speed and superb design makes the Mustang an enduring vehicle in a disposable world.

The design of the 2018 Ford Mustang is faultless. It looks sharp, has sleek lines and looks good standing still or on the move. The long hood and heavier rear balance each other out perfectly and the sloped windshield and roof add a real sporty look that doesn’t compromise internal space.

The opportunity to own an iconic car without a V8 is compelling. The 2.3-litre four cylinder may not have the roar but it has decent gas mileage and credible performance worthy of a Mustang. The awesome Coyote V8 is the king though, with 460 hp and 420 lb-ft of torque, it is hard to fault if you want to get the most out of the car.

With the option for a manual or automatic transmission, the new GT Performance Package and a ton of optional features, this is a very versatile car as well as an exciting one. All this for less than many lower powered competitors? Why would you choose anything else?

See why the Ford Mustang has endured with a test drive. Visit Northway Ford Lincoln, 388 King George Road Brantford ON N3S 3N2 to arrange one.